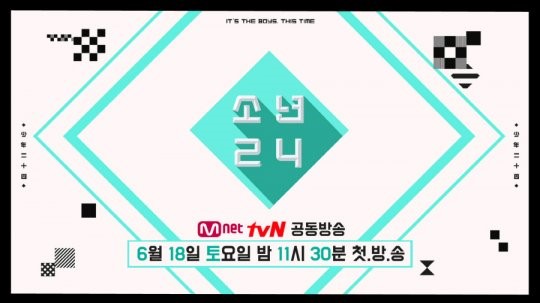 Breaking through an intense competition rate of 220 to one, 49 talented boys will compete each week in units for the final spot in a group of 24. Those 24 boys will then win the opportunity to perform live on various stages for one year, all 365 days, in different units. After these live performance missions, the final unit will debut as an idol group.

While previous survival shows have emphasized the importance of the individual, this show will focus on the unit, encouraging good team work. The best unit will win 200 million won (approximately $171,220) of investment into their music production and unit activities promotion. The best of the experts in the vocal, rap, and dance industries will be on hand to help them train.

The lead producer for the 8-episode “Boys24” Oh Kwang Suk said, “If the survival shows thus far have picked the best one person, ‘Boys24’ will pick the best team work through unit competitions.”

Ahn Suk Joon, the president of the music department for CJ E&M, added, “’Boys24’ is a project that combines broadcast, performance and music together and we plan on expanding it globally, like to China, Japan, and Southeast Asia. I hope many people are interested in our program.”