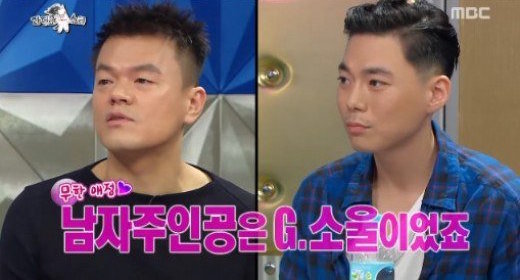 On the May 11 broadcast of MBC “Radio Star,” G.Soul explains why he ended up spending 15 years in the United States instead of debuting. He says that up until the U.S. financial crisis in 2008, Korean artists were being well-received in the United States. After the economy plummeted, a lot of production companies called it quits.

Park Jin Young shares, “I was worried about G.Soul, and that’s how I came to write a portion of a drama storyline. It became ‘Dream High.’ I thought that if we made G.Soul the lead and then sent him back to America, his probability of success would be high.”

However, G.Soul declined the offer. Jo Kwon also chimes in, “I also got a call. At the time, G.Soul was not interested in acting or dramas.” The role would ultimately be filled by Kim Soo Hyun.