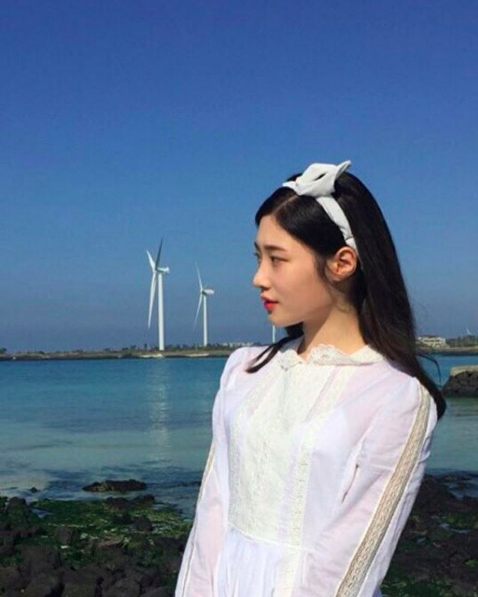 Jung Chaeyeon has been swept up in controversy after it was revealed that although she is a current member of the temporary group I.O.I, she has also rejoined girl group DIA.

The young artist was previously a member of DIA before she left the group to take trainee status at her agency MBK Entertainment in order to join the trainee competition show “Produce 101,” where she secured a spot in the final 11 and has now debuted as a member of the temporary multi-agency group I.O.I.

Jung Chaeyeon has been actively promoting I.O.I’s debut mini album “Chrysalis” and their title track “Dream Girls,” but on May 11, it was revealed that she was also taking part in filming DIA’s comeback music video on Jeju Island.

On that day, she wrote an apology on her Instagram as the caption to a photo of herself which may have been taken on Jeju Island.

Her apology is as follows:

“Hello. This is Chaeyeon. You were really surprised today when you saw the news about me joining DIA, right? I’ve worried a lot about how I could convey my feelings to you without causing any misunderstanding.

Every single moment that I get to stand in front of all of you is so precious. So I will do all that I can to ensure that I don’t hurt you or disappoint you in the future. I’ll always do my best. Thank you.”

Jung Chaeyeon was met by a crowd of reporters at Gimpo International Airport on May 12, after returning from filming DIA’s music video on Jeju Island.

She said to the media, “I want to express my apologies. I’ll work harder in the future. Thank you.”

Meanwhile, her agency MBK Entertainment has stated that Jung Chaeyeon’s promotions will not overlap, as I.O.I’s debut album promotions will have ended before DIA makes their comeback.

What do you think about Jung Chaeyeon technically being an official member of two groups at the same time?

DIA
Jung Chaeyeon
I.O.I
How does this article make you feel?