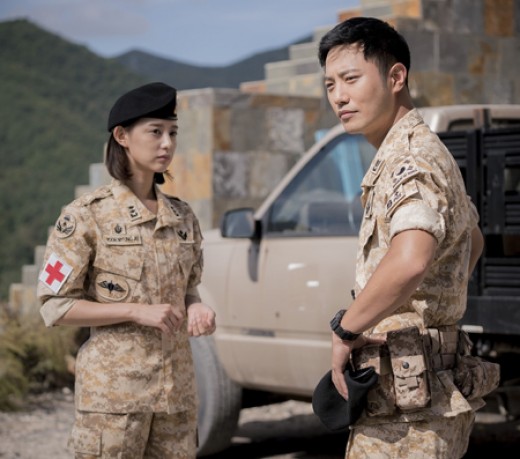 At the OST concert for the hit drama “Descendants of the Sun” on May 14 in Seoul, actress Kim Ji Won shared some insights into her co-star and love interest in the show Jin Goo.

The pair reenacted a popular scene from the drama for fans in the audience. When asked how similar Jin Goo is to his character Seo Dae Young, Kim Ji Won replies, “About 50 percent.”

She adds, “He would suddenly change 100 percent in Seo Dae Young when we were filming, but usually he has a boyish charm.” Kim Ji Won goes on to joke, “He’s like what he looks like when he dances along to Red Velvet’s ‘Dumb Dumb.’” Red Velvet made a special cameo in the final episode of “Descendants of the Sun,” and Jin Goo later danced to “Dumb Dumb” on May 1’s episode of “Running Man.”

The audience then asks him to dance, but Jin Goo dodges their request by saying, “Unfortunately the song hasn’t been prepared, so I can’t.”

Kim Ji Won also says that Jin Goo is similar to his character in the way that he loves his wife.

Watch Jin Goo and Kim Ji Won in the first episode of “Descendants of the Sun” below!