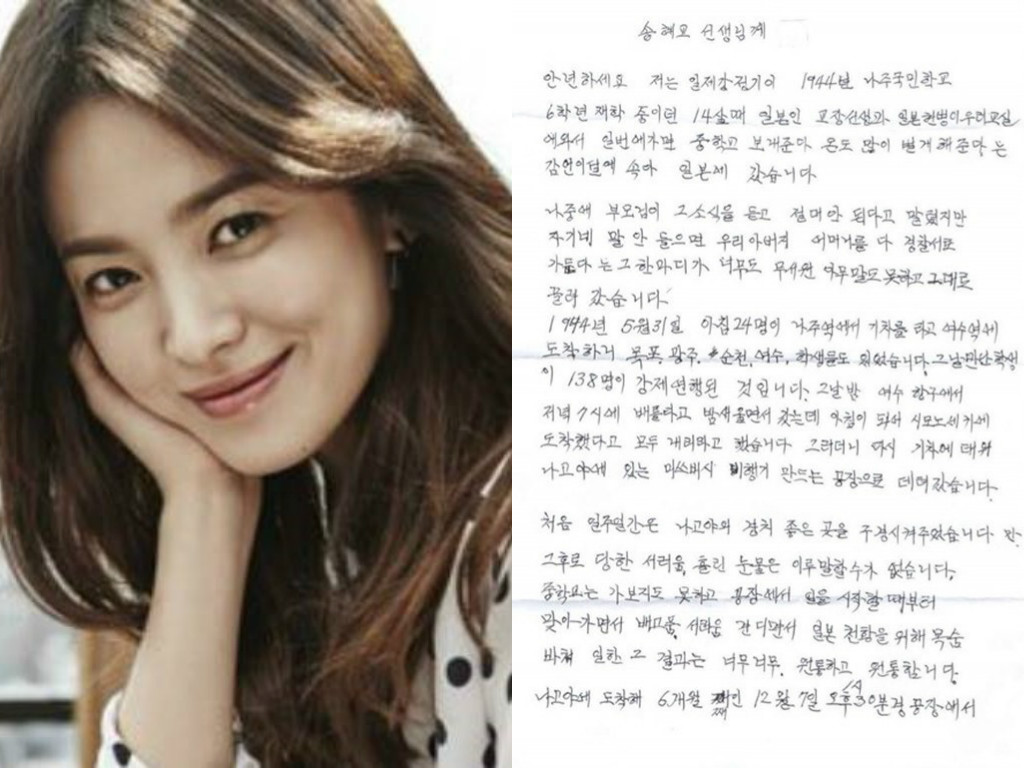 Yang Geum Duk is one of the women who, at the young age of 14, were victims of forced labor in Mitsubishi Heavy Industries factories in Japan during the Second World War.

Through the letter, Yang Geum Duk thanks the actress for her decision to reject a modelling offer from Mitsubishi.

Yang Geum Duk writes, “I was in my sixth grade in Naju Elementary School when our Japanese principal entered our classroom with a government official and told us we should attend middle school in Japan. They coaxed us to leave by saying we would earn a lot of money.”

She continues, “The sorrow and tears we suffered since then cannot be expressed in words. We didn’t even attend middle school, and endured hunger and distress as we worked in the factory. Our lives ended up being dedicated to the Emperor of Japan, and we resented it greatly.”

In the letter, Yang Geum Duk recounts her experience of being trapped for three hours under the wreckage of the factory after an earthquake.

She then shows her admiration for Song Hye Kyo, saying, “When I heard your wise decision to reject the offer from Mitsubishi, I shed tears and felt as if the thorns in this grandmother’s heart had all fallen out. I was so glad that if I had wings, I would have flown away.

I want to repeatedly thank you for your admirable decision. To us, this is not plea for money, but a plea for an apology from Mitsubishi, and your stand is a first step towards that. I so desperately seek that apology that even if I should leave this world to receive it, I will simply close my eyes and go.

Until the end of this one life, I will succeed in this fight by all means, with the combined strength of everyone who is helping us. I thank you and would like to see you, Ms. Song. I often see you on television. For your health and for happiness in your home, this 88-year-old grandmother, Yang Geum Duk, puts her hands together and raises them unto God.”

Song Hye Kyo is said to have rejected the offer from Mitsubishi due to the corporation’s lack of acknowledgment of its responsibility for the incidents in World War II.