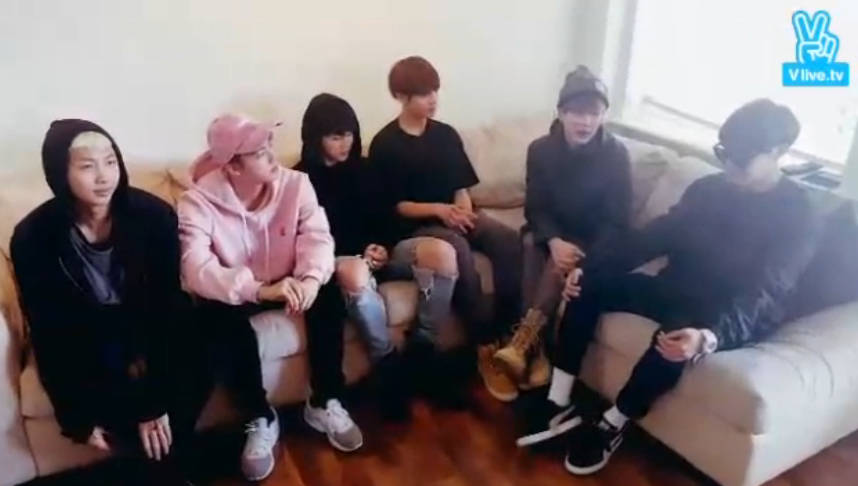 After being spotted by Norwegian fans in Bergen yesterday, BTS has now updated fans on what they’re doing in Norway!

BTS jetted off to Norway following their short promotions for their special album “Young Forever” on music shows last week, although member V had to stay in Korea longer than the rest to film his upcoming drama “Hwarang: The Beginning.”

On May 17, Rap Monster, Jin, Jimin, Jungkook, Suga, and J-Hope sat down for a casual chat about what they’re up to. Suga claims that they’ve come to Norway to celebrate Jungkook becoming an adult, which officially occurred on May 16 on Korea’s “Coming of Age” day. “Jungkook is paying for all the travel expenses!” he jokes.

Suga goes on to explain that they’re really on vacation. “You were surprised, right?” he says, and Rap Monster adds, “We were surprised too.”

They talk about the party they held for Jungkook, complete with a cake bought by Jin, but Jin points out that he hasn’t had a kiss from one of the members yet (on “Coming of Age” day in Korea, new adults traditionally receive flowers, perfume, and a kiss). Rap Monster pretends to be yelling out to V that he can give Jungkook a kiss, but Jungkook says, “I want one from you fans!”

They then thank fans for their first place wins, and say they had a great time promoting “Fire.”

In addition, BTS’s agency Big Hit has told news outlet Star News that the group left for Norway after filming “Inkigayo” on May 15, and that V has now joined them after wrapping up his scheduled filming in Korea.

A representative from Big Hit said, “The seven members have gone on a trip after finishing their promotions of their special album. They’ll be returning to Korea after enjoying their time in Norway for about a week.”

They add, “While they’re on their trip, they’ll be filming special content for their fans. It’s difficult to say at this point what it will be.”

What do you hope BTS is filming for fans in Norway?