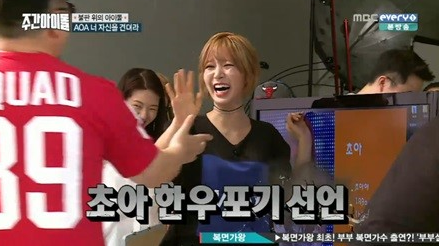 MBC’s variety show “Weekly Idol” made Choa and Chanmi yelp in horror as they revealed old footage of the members.

On the May 18 episode of the show, girl group AOA were the guests. During one of the segments on the show, the members had to sit through a video clip from earlier in their career and not show signs of embarrassment.

Jimin’s video clip showed her acting cute and speaking with aegyo. Although she was taken aback, she survived without being too embarrassed and Seolhyun also survived her video, which was an old clip that showed her as an angel.

Choa was next and as soon as her video showed up on the screen, she jumped up from her chair and dashed to the monitor to cover it up, immediately giving up on eating the beef that would have been the prize.

Chanmi was the next victim and sure enough, as soon as her video came on the screen, she too screamed as she ran to the monitor to cover it up, giving up on the prize meat as well.

AOA is currently promoting their new album “Good Luck,” which was released on May 16.

Check out the hilarious clip below. Do you think their old footage was that bad?

Support the artist by buying Good Luck from YesAsia

AOA
Choa
Chanmi
Weekly Idol
How does this article make you feel?