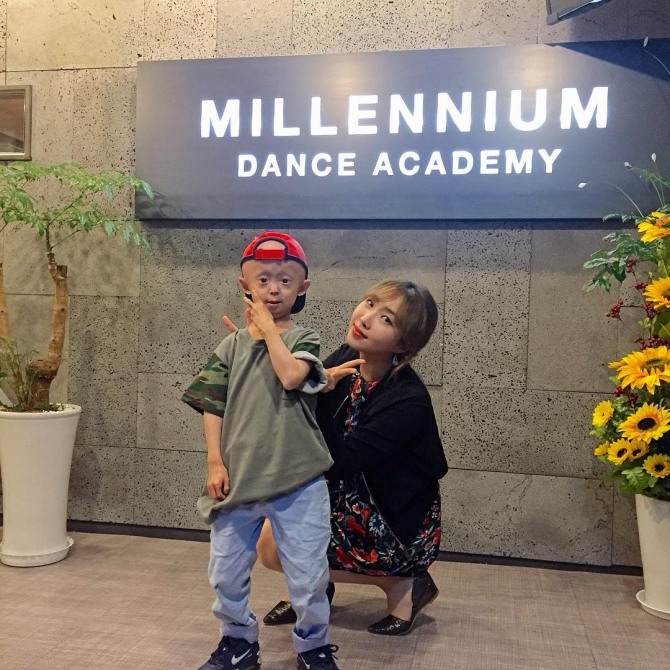 On May 19, former 2NE1 member, Gong Minzy, wrote a supportive message on her Instagram for Hong Won Ki, a young boy who suffers from a condition called progeria.

She writes, “Hello. It’s Gong Minzy. Perhaps you remember the cute and brave ‘Hong Won Ki’ who appeared on ‘Screening Humanity.’ Hong Won Ki likes to sing and dance so he often visits our academy too, but this time I heard his story on MBC’s ‘Human Documentary.’ For bravely overcoming all circumstances and awesomely living each day, I want to cheer on our Hong Won Ki.”

Minzy continues, “MBC’s ‘Human Documentary Love’ episode, ‘The Boy Who Runs Through Time’ will air on May 23 at 11:10 p.m. KST! I hope there will be a lot of support and many viewers.”

Along with this caption, Minzy posts a photograph of the two together outside of her dance academy as they strike a cute pose.

Hong Won Ki is only a child, but he suffers from an advanced ageing condition called progeria, which means he has the body of someone in their sixties. Progeria is extremely rare, and Hong Won Ki is the only child confirmed to suffer from the disorder in South Korea.

Human Documentary Love
Minzy
How does this article make you feel?