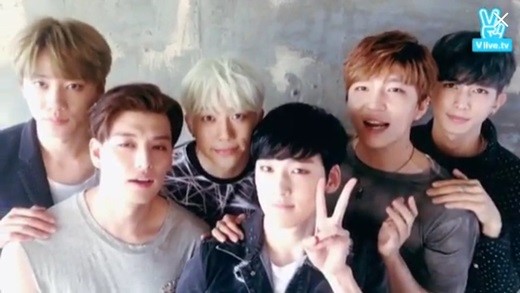 U-KISS fans can now rejoice because the group is finally making a comeback in Korea!

On May 18, U-KISS hosted a live broadcast over Naver’s V app from the set of their upcoming music video. They sing a short bit of their new song for fans, to give us a taste of what we can expect from them soon.

Soohyun also describes their comeback concept as “powerful performance,” and says that we can all look forward to it. Kevin translates for English-speaking fans, and explains, “It’s been around a year and a half since our last comeback in Korea, and if ‘Playground’ was a medium-tempo softer side concept, this time it’s going to be a really powerful dance track.”

The guys then joke around as they show off each of their new hair styles for this comeback, before having to return to filming.

In addition, U-KISS’s agency has also stated, “The members are focused on working on their new album, with the goal of staging a comeback in early June. They are currently working on the post-production stage.”

U-KISS debuted in 2008, and have been very active in Japan recently. Their latest release in Korea was the mini album “Always” in January of 2015.

Are you excited for a return from U-KISS?