Celebrities Speak Out Against Misogyny Surrounding Recent Homicide In Gangnam

Tensions are running high in Korea after the murder of a 23-year-old woman by a man she didn’t know.

The woman was found stabbed three to four times in a bathroom in the stairwell near the bar where she’d been drinking with friends. The suspect, a 34-year-old man identified only as Kim, reportedly confessed to the crime and told police that he was motivated by his hatred for women, according to the Korea Herald.

Now, people in Korea are speaking out against the kind of misogyny that cost the young woman her life – even celebrities have expressed their outrage. 2PM’s Chansung took to Twitter to speak his mind.

“What should I say…” Chansung wrote. “This is really low. Would this have happened if [the victim] had been a man? It was the fact that she was a woman that motivated him to act that way. It wasn’t an accident, but a choice. If only he could feel the consequences his choices brought about…”

He continued, “Also, I think that this exposes the problems in our society, even though the incident was a result of [the suspect’s] individual problems. I think that there are those kinds of people among us, and they easily hide in plain sight.” 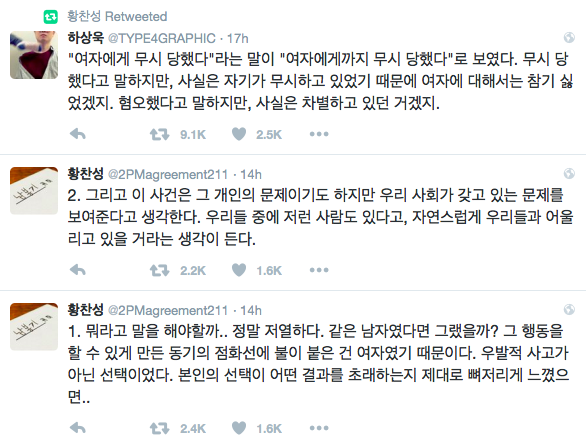 Chansung also retweeted another person’s tweet on the matter, which read, “Him saying ‘I was belittled by women’ sounded like ‘I was belittled even by women.’ He said he was belittled, but the truth is that he was the one doing the belittling, and he hated holding back when it came to women. He said he hates women, but in truth all he was doing was discriminating against them.”

The idol isn’t the only one to speak out, either; singer Kim Heung Gook also spoke up about the issue on the May 19 broadcast of his radio show. He said, “We have to create a world in which women feel at ease. If women live in fear, the world will become difficult.”

The murder has shocked the nation, and many women cite the prevalence of violence against women, sexual harrassment, and victim blaming as a contributing factor.

Kim Heung Gook
2PM
Chansung
How does this article make you feel?