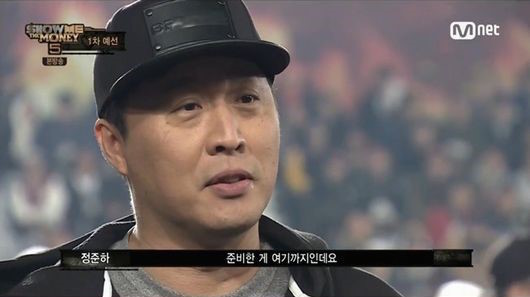 Jung Joon Ha’s “Show Me the Money 5” Audition Results In…?

On May 20, the results of Jung Joon Ha’s preliminary audition for Mnet’s “Show Me the Money 5” were finally revealed during the show’s second episode.

His actual audition was shown last week, and received much praise from contestants and viewers alike for his hard work, which was reflected in his rapping skills and truthful lyrics.

However, when Simon D, his judge, asks the star if he can perform another rap, Jung Joon Ha truthfully responds that he only prepared one. While Simon D looks hesitant, in the end, Jung Joon Ha does not pass the preliminary round, and is unable to move on.

Later, during the interview, he expresses his thanks to the show, for giving him unforgettable memories. He says, “I didn’t know that I had this sort of passion towards rap or hip-hop. I truly respect and support the other contestants.”

When asked if he plans on rapping, Jung Joon Ha replies that “Season 6 [of ‘Show Me the Money’] is still a possibility.”

As soon as his part aired, the star also left a message of thanks on his personal Twitter account, writing, “This is how it ended! My heart feels free! My wife also just found out…Anyways, thank you for all of your support and interest up until now! I love you all! Everyone, ‘Infinite~ Challenge!’ Thank you ‘Show Me the Money!'”

While it may not have ended in success, his hard work and efforts are still admirable. Watch his impressive audition below:

Show Me the Money 5
Jung Joon Ha
How does this article make you feel?