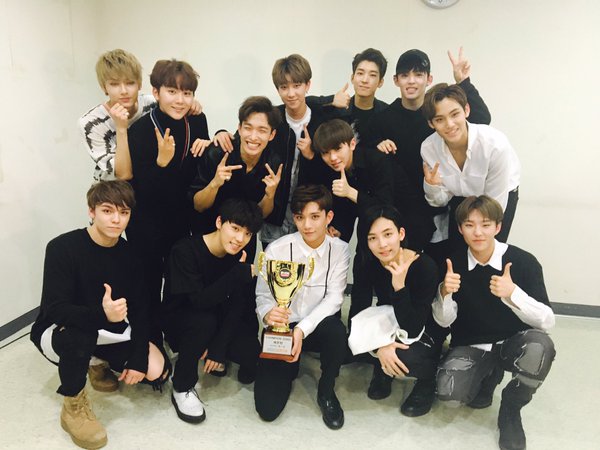 SEVENTEEN Shares Thoughts About First Win And “Pretty U” Choreography

Boy group SEVENTEEN is currently a rising force in the industry, selling an impressive number of albums and recently taking their first win on a music program.

Member Vernon said, “We’re so happy that we won. Honestly, it was hard to believe that we were even nominated. We thought we would just go up on stage at the end and greet our fans and come down again, since our sunbaes would definitely get the trophy. But instead, our song came on and it was a shock.”

When asked whether they felt regret at not getting more wins, S.Coups and Seungkwan said, “It’s enough just to do it once. We even cried. We’re proud that ‘Pretty U’ got good feedback and that the sound of the cheers has gotten louder. We’ve gained confidence and gratitude and we want to work harder to pay back all the love that we’ve received.”

DK said, “I remember a comment that another fan left. They said that SEVENTEEN’s music can always be trusted, and complimented our album songs as well as our title track.”

The group was also asked about their prop-heavy choreography for “Pretty U.”

“On the first day of practice, I thought it was amazing,” Joshua shared. “It was so dramatic to use the sofa in that way. It’s still choreography, but Hoshi put a little bit of acting into it and so it became fun.”

Hoshi added, “When we were making choreography, I thought about what it was that only SEVENTEEN could do. I thought that since we have so many members, we could do this sort of thing. It’s our first time using props so I’m glad that people like it.”