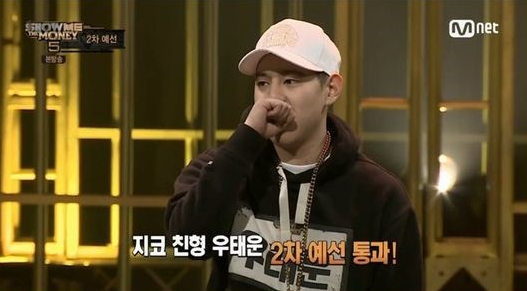 Zico’s Brother, Woo Taewoon Sheds Tears At Second Round Of “Show Me The Money 5”

On the May 20 episode of Mnet survival program, “Show Me The Money 5,” the hip hop star hopefuls enter the second round of preliminaries.

One of this week’s contestants is Woo Taewoon, former Speed leader, and older brother of Block B’s Zico. In 2015, he took part in “Show Me The Money 4” but failed to make it into the top 16.

“It seemed like I disgraced my brother’s name, and that made my heart ache,” he confesses while taking part in the second round of preliminaries.

However, he goes on to show off his rapping skills and makes it through to the next round with an “all pass” from the impressed judges. Woo Taewoon is so happy he sheds tears, saying, “Next time I’ll be cooler, Mom, Jiho.” Jiho is Zico’s real name.

We look forward to seeing more of Woo Taewoon’s skills in later episodes!

Block B
Show Me the Money 5
Woo Taewoon
Zico
How does this article make you feel?