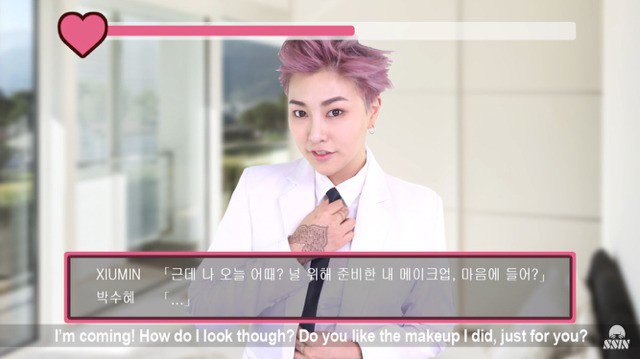 Beauty YouTuber SSIN steps up to apologize for a recent makeup tutorial video she uploaded, which “featured” EXO’s Xiumin.

The original video in question was a Nature Republic sponsored video where she showed how to imitate Xiumin’s makeup. Known for her creative content, SSIN formatted the video as if it was a dating simulation game, where “Xiumin” would “teach” SSIN how to apply makeup, depending on the “choices” she made.

The problem arose when she made several sexual innuendos and references, while both dressed up as Xiumin, and towards the imaginary Xiumin as “SSIN” herself.

While her normal content is more casual about such topics in general, many felt she crossed a line because the person she was imitating is, in fact, a real person, and the language used is a form of sexual harassment. Also, several people point out that she should have been more aware of her younger, under-aged viewers as well, since she has close to one million subscribers.

The video has since been deleted.

While she originally posted a shorter apology on Instagram, she has since deleted that apology and replaced it with a longer one. SSIN also posted an apology video, which you can watch below.

She apologizes not only to the singer, but to all her viewers as well. SSIN says she will take time to reflect on her content, actions, as well as words. She thanks her subscribers who’ve supported her until now, and says she will show a better side of herself in the future.

What are your thoughts on the situation and her apology?

Thanks to Jenna for the tip!

EXO
Xiumin
ssin
How does this article make you feel?