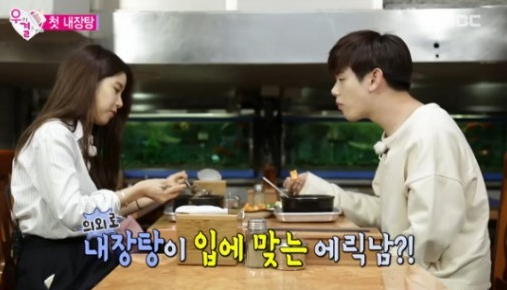 Watch: Solar Gets Eric Nam To Eat An Interesting Soup On “We Got Married”

What’s marriage without a little sacrifice?

On the May 21 episode of the MBC variety show “We Got Married Season 4,” Eric Nam and Mamamoo’s Solar look at potential locations for their newlywed home. After viewing a few, they stop by a restaurant to eat a late lunch, recommended by Solar. The menu? Solar’s self-proclaimed favorite of beef tripe and intestine soup.

Solar had previously mentioned this as her favorite food and Eric had promised to eat it with her. Solar says, “I wanted to introduce to him the deep taste of intestine soup.” Despite his hesitation at eating it for the first time, Eric mentions, “Since she said it’s a food she likes to eat, I thought I should try it out.”

After a few big bites, Eric says, “It’s not so bad. So it’s this kind of taste.” He soon admits to Solar, however, that, “It’s not my style,” but he continues to try to eat it for her.

Solar notices his considerate action and in her interview with producers, saying “It was possible that the food didn’t match well with him but he kept trying to eat it with me, so I was really thankful. I was touched.”