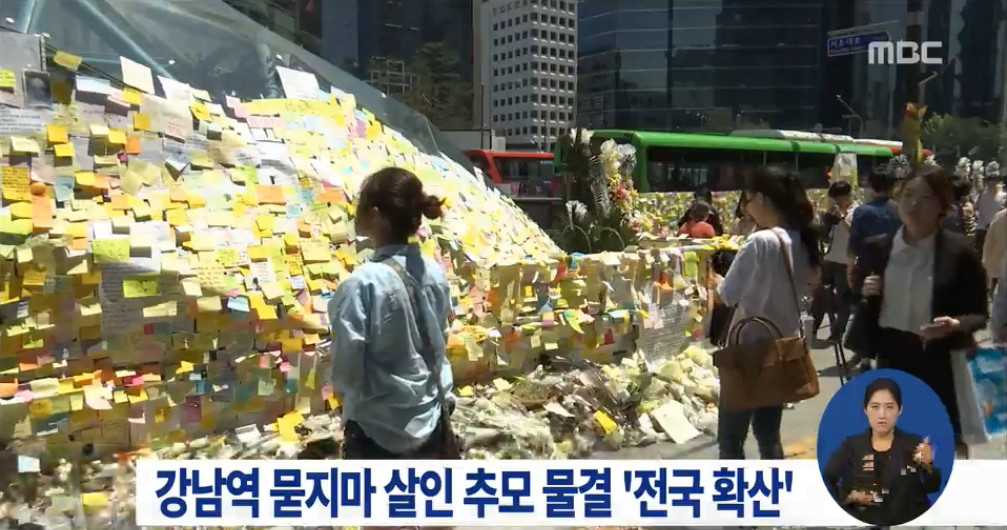 Korean citizens have flocked to the Gangnam subway station in throngs for the last four days to pay tribute to the 23-year-old woman who was murdered near there.

People have turned the No. 10 exit at Gangnam Station into an impromptu memorial for the victim, leaving post-it notes and flowers and offering up their prayers. One online community organized a gathering from 5 p.m. to 7 p.m. KST on May 21 to mourn the loss of the young woman.

The news has spread to all corners of the country, as well; from college campuses to cities as far as Busan, Daegu, and Daejeon, people have been gathering to hold candlelight vigils and offer condolences to the victim and her family.

The victim was found stabbed in a bathroom near the bar where she was drinking with friends. Her killer – a 34-year-old man identified only by his surname Kim – reportedly confessed to the crime and told police that he’d been “belittled by women” and was motivated by his hatred for them.

Gangnam Station
How does this article make you feel?