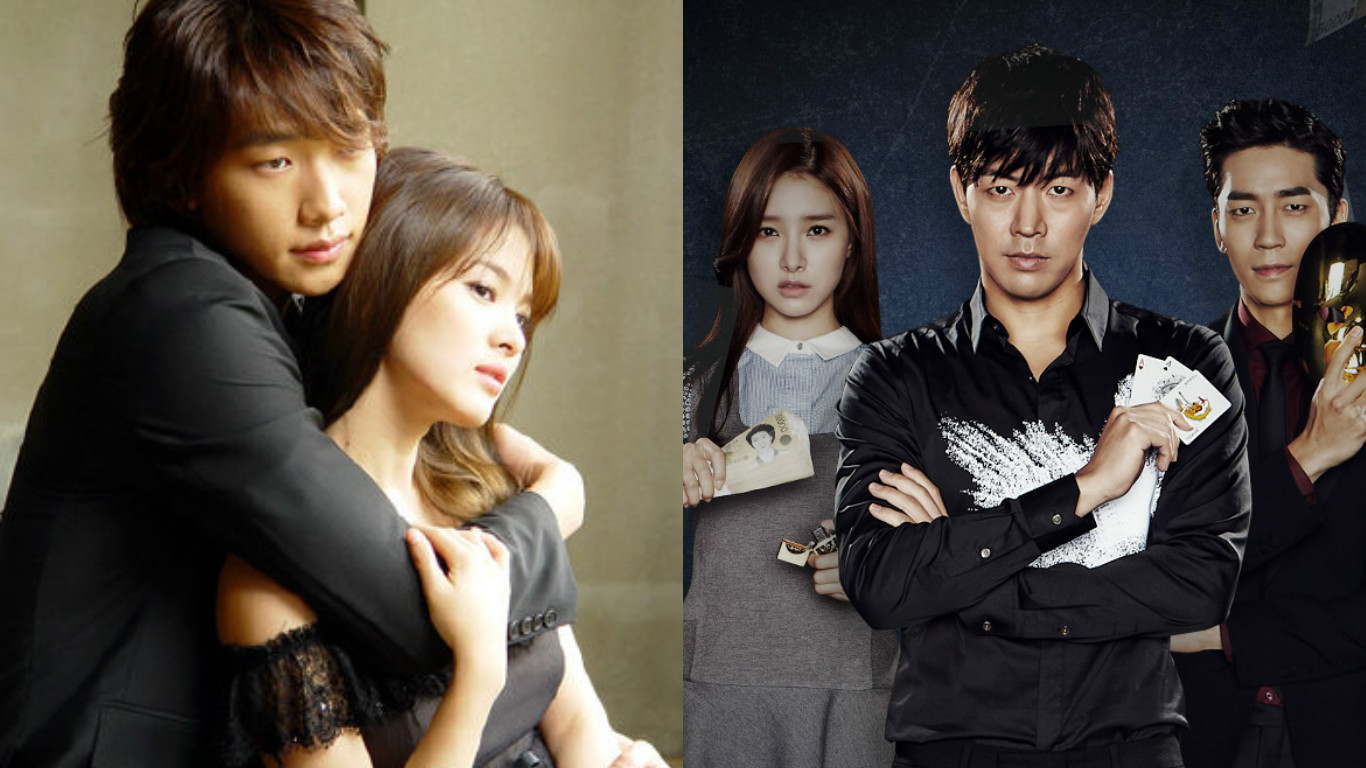 10 Great K-Dramas That Originated As Manga Or Manhwa

Hopefully we will never run out of manga and manhwa stories to turn into amazing dramas! Many popular series — and dramas most people don’t even know about — have been based on these comics and they are always a treat for K-drama fans. To share the love for these living adaptations, here are 10 dramas based on manga, manhwa, and webtoons that all drama-loving people should see! (However, if you don’t see some obvious ones like “To The Beautiful You” they may be featured in a previous article here.) 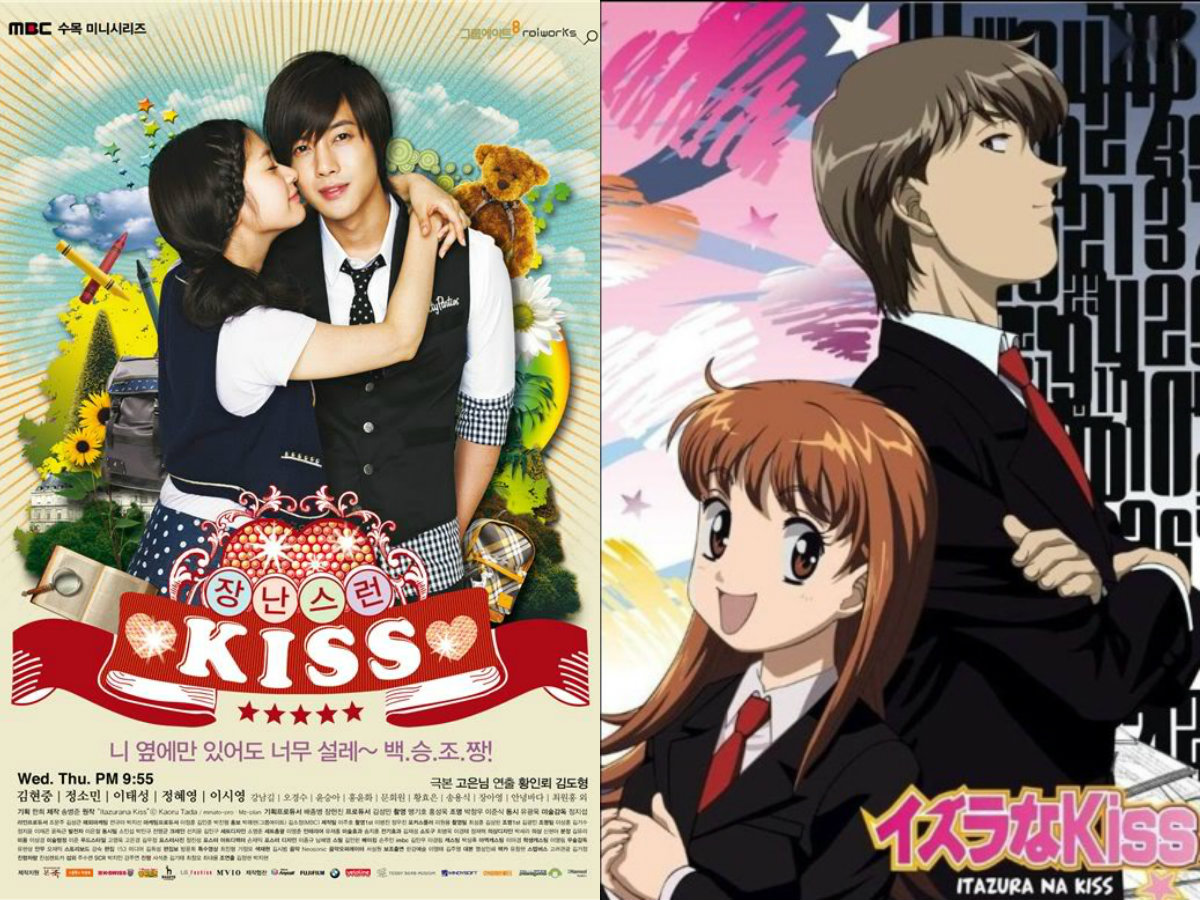 Based on the manga “Itzura na Kiss” by Kaoru Tada.

A quirky and fun romantic comedy, “Playful Kiss” is one of many drama adaptations of the original manga. Despite it being nonsensical at times, this Korean version has become a favorite for many with it’s lovable premise. A true underdog story, we get to watch Ha Ni (Jung So Min) pursue her perfect crush Seung Jo (Kim Hyun Joong) at school. However, there is one slight drawback; Ha Ni is less than perfect while her dream man is the top student at their school, and things get even more complicated when her family suddenly moves in with his! 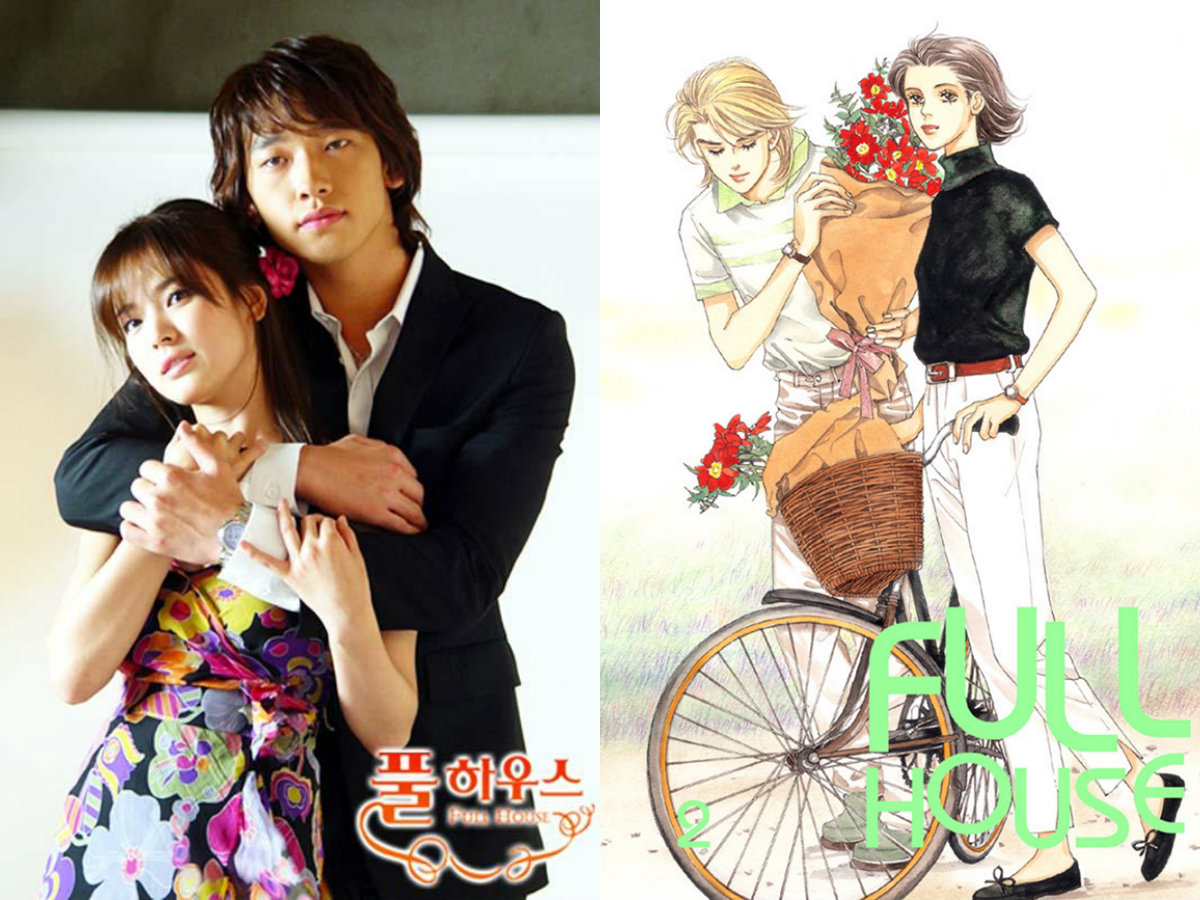 Based on the manhwa “Full House” by Won Soo Yeon.

A classic, “Full House” has been remade in numerous countries, including a new version from Korea as well. Thankfully the original still stands strong and captivates many with its romantic nature. Another underdog story, we see Han Ji Eun (Song Hye Kyo), an unsuccessful scriptwriter, meeting Lee Young Jae (Rain), a famous actor, and the two eventually develop feelings for each other. Despite these feelings, Lee Young Jae is still attached to an old love of his and Han Ji Eun gains a handsome admirer; but with the two of them stuck living together they will eventually have to decide who they really love.

So much always happens when people live together, it really does do wonders for romantic relationships! It is not surprising that many popular dramas have used this idea in their stories. 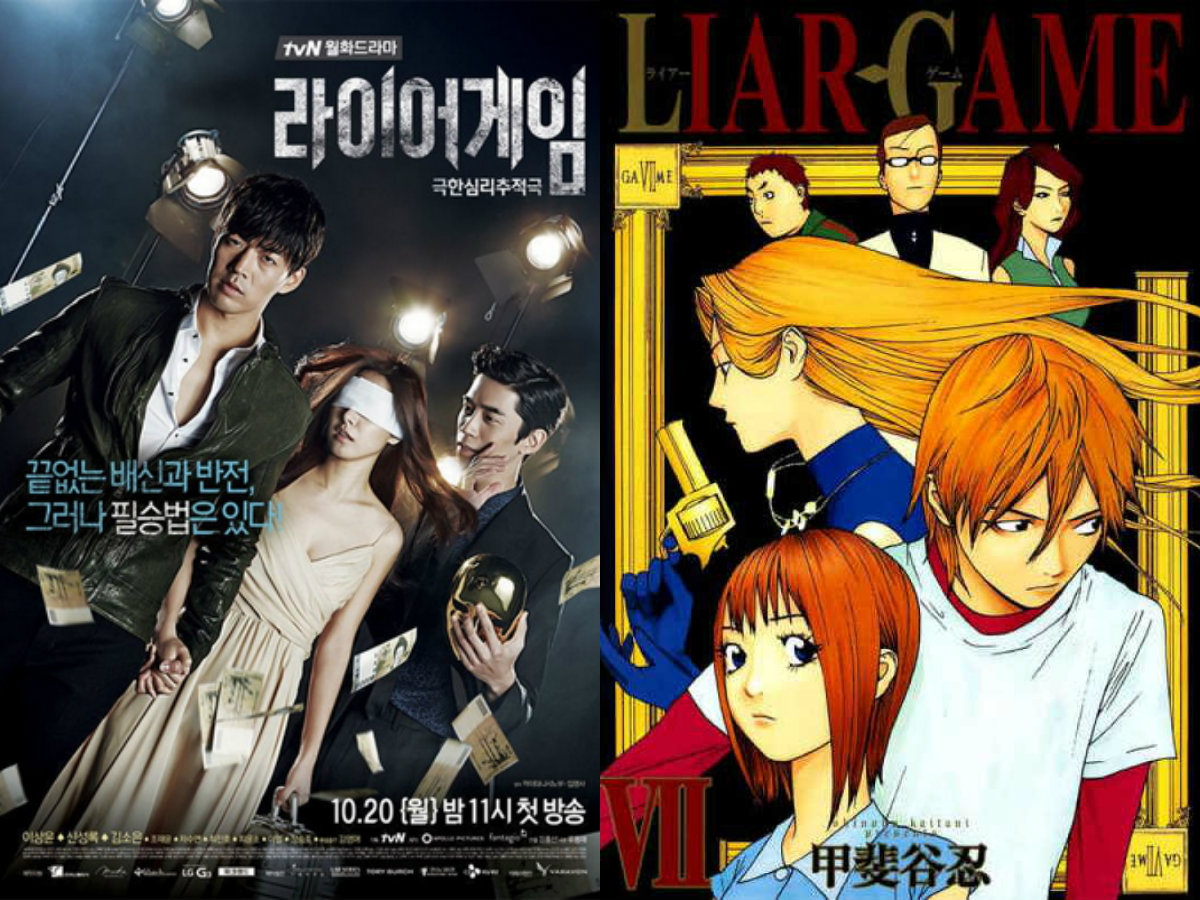 Based on the manga “Liar game” by Shinobu Kaitani.

Money makes the world go round is a lesson that Nam Da Jung (Kim So Eun), a truthful and naive college student, learns when she and Ha Woo Jin (Lee Sang Yoon), a brilliant con-artist, end up involved in a psychological survival game. Participating in this reality show called the “Liar Game,” the two are expected to do whatever it takes to win, but is that something our leading lady is willing to do for the immense sum of prize money?

A great suspense and thriller drama, this one is highly recommended for all viewers, but especially for those who like a little mystery in their entertainment! 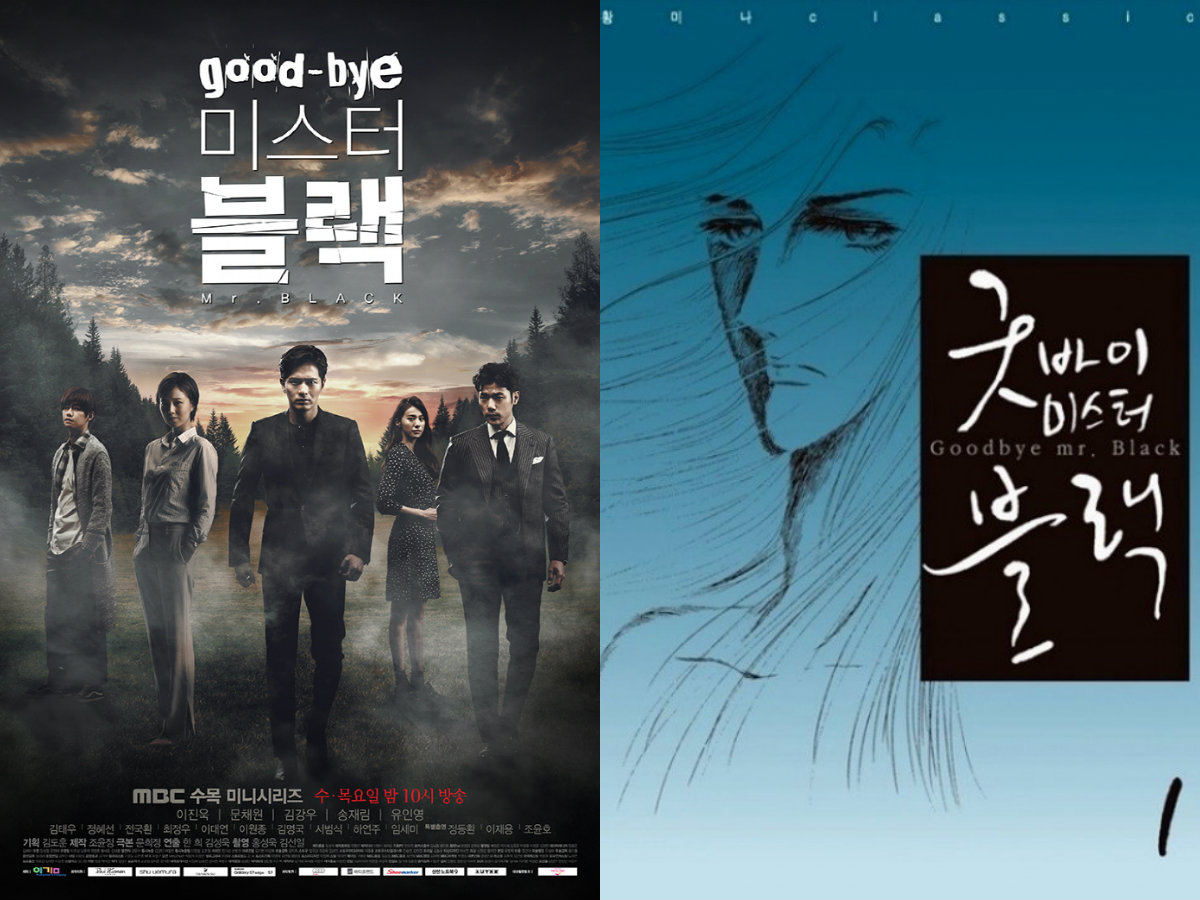 Based on the comic “Goodbye Mr. Black” by Hwang Mi-Na, who loosely based his comic on french author Alexandre Dumas’ novel “The Count of Monte Cristo.”

What could possibly go wrong with wanting righteous justice for your father’s killer? The answer to this question is much more sinister than Cha Ji Won (Lee Jin Wook) was expecting, when he decided to avenge his fathers unnecessary death. Many of the trails he follows end up in dead ends, but will he ever find out that his jealous best friend, Min Sun Jae (Kim Kang Woo), might be more involved in his late father’s undoing than he ever realized?

A great drama and adaptation of the comic, “Goodbye Mr. Black” is perfect for those that want more than romance in a show. 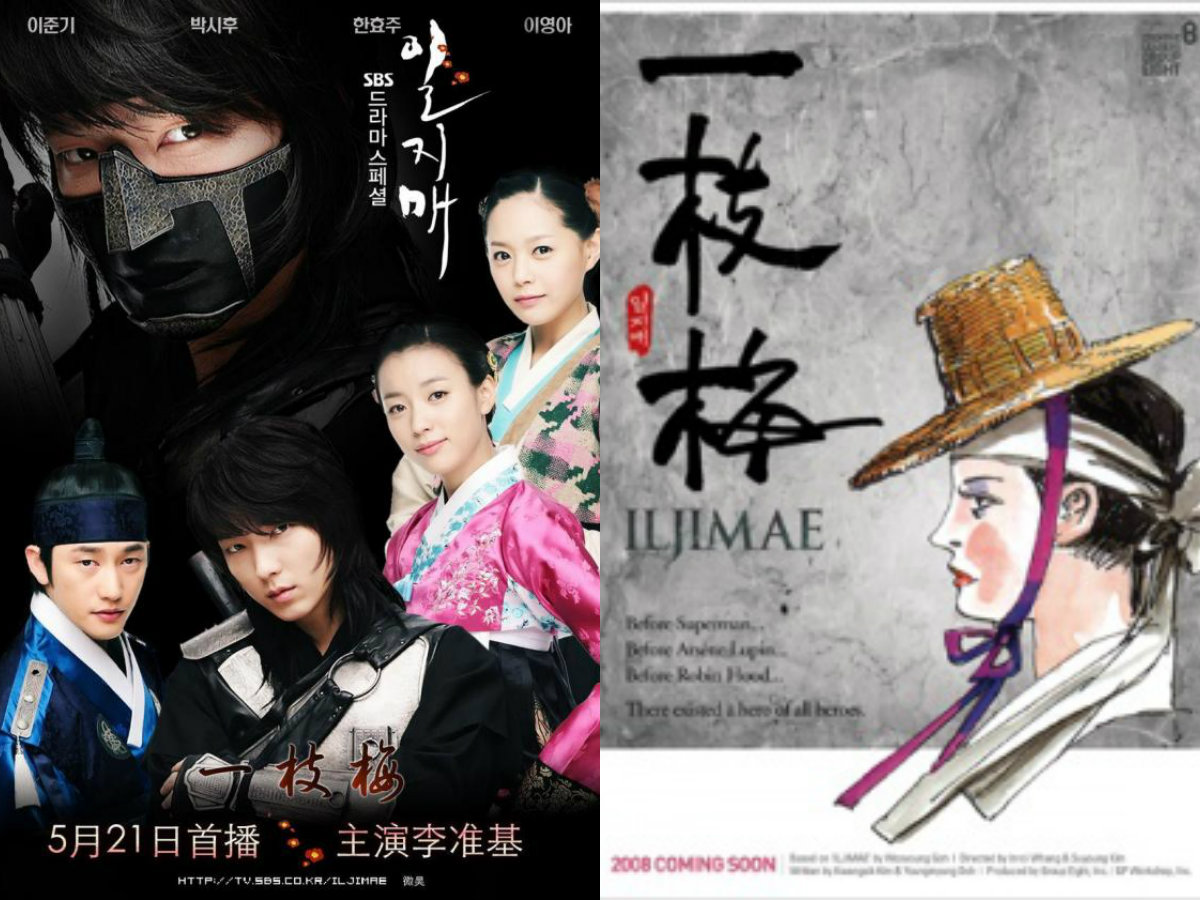 Based on the manhwa “Iljimae” by Ko Woo Young.

Apparently when a man’s father dies, he will aspire to do amazing things and become a person with outstanding accomplishments. Despite this common premise, “Iljimae” is a spectacular drama with a Robin Hood-like lead character.

When Il Ji Mae’s (Lee Joon Gi) father passes away he is raised by a retired thief. He eventually grows into a champion who steals from the rich and gives to the poor; all the while searching for the mysterious man who killed his father. During his escapades he encounters the daughter of one of the many government officials that are after him, named Eun Chae (Han Hyo Joo), and she develops romantic interest in him.

If you enjoy this adaptation of the manhwa “Iljimae” then another drama I highly recommend is “The Return of Iljimae.” Both of these live action versions are great, despite the fact that they are completely unrelated to one another. 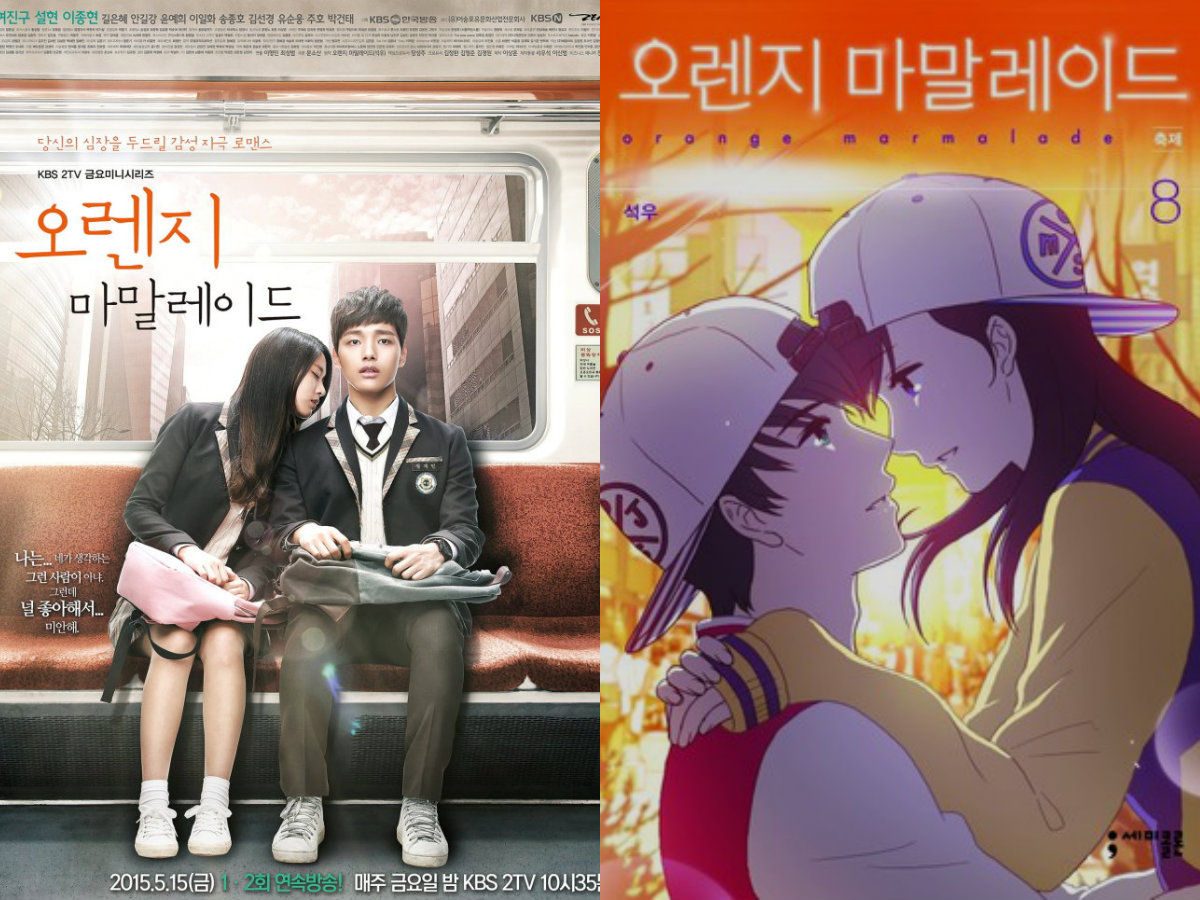 Based on the webtoon “Orange Marmalade” by Seok Woo.

While dramas with vampire themes are becoming more common, “Orange Marmalade” is truly unique as it mixes the love story of two high school students from modern times all the way back to Joseon times. As Jung Jae Min (Yeo Jin Goo) finds himself falling for his beautiful classmate Baek Ma Ri (Seolhyun), he doesn’t realize that she is a vampire in hiding. This drama reveals that these two students are reincarnations of two young lovers from the Joseon era that met a tragic end, but will these two finally get their happy ending after so many years? 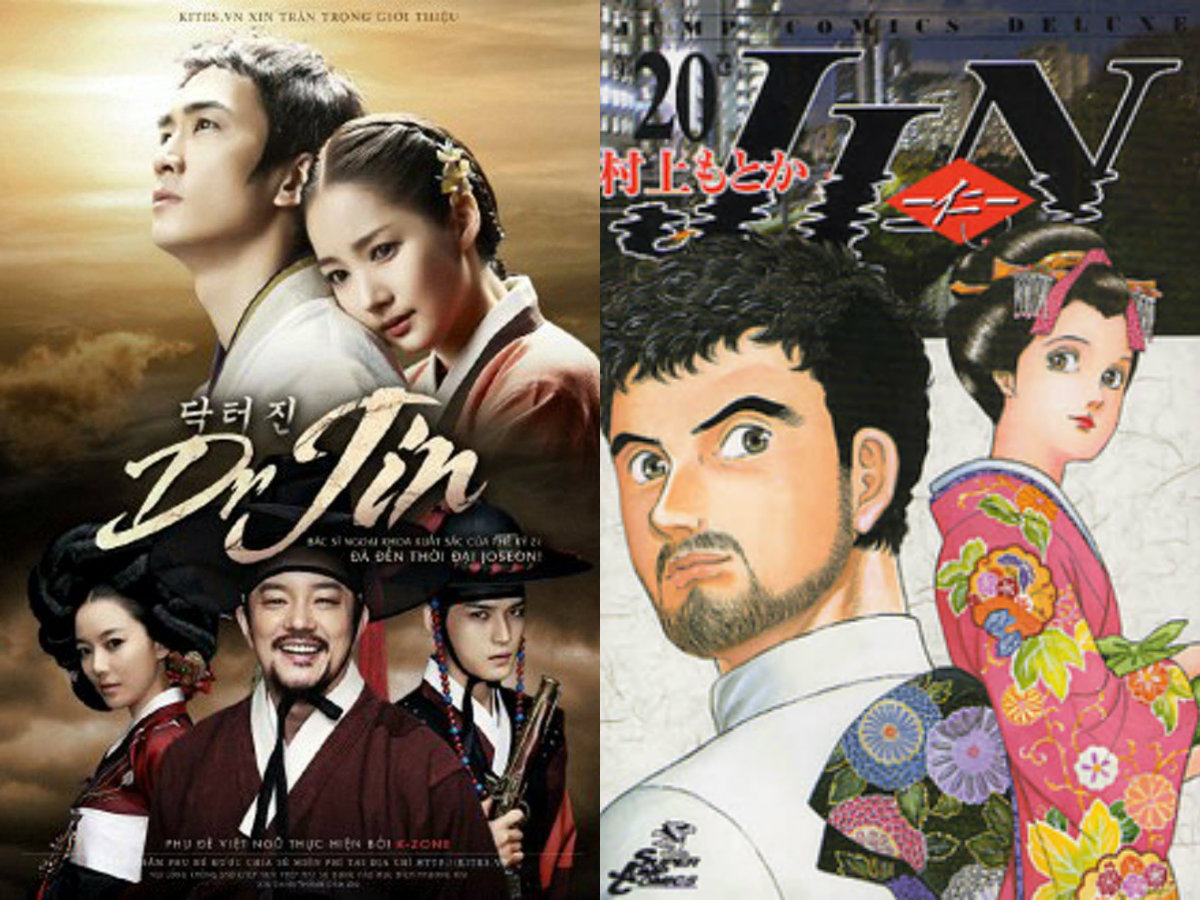 Based on the manga “Jin” by Motoka Murakami.

The final drama on this list that has a traditional aspect to it is “Dr. Jin.” This fantasy medical drama tells us the story of genius neurosurgeon Dr. Jin Hyuk (Song Seung Heon), who finds himself transported back in time 150 years. He not only has to be innovative and creative to help people without his modern equipment, but he also struggles with matters of the heart when he encounters the beautiful Hong Young Rae (Park Min Young). She happens to look exactly like his modern day love, Dr. Yoo Min Ah (Park Min Young), who suffered a crippling accident before he was swept back in time. He begins to wonder if he will ever be able to get back to modern times, but the main question he finds himself pondering is if he actually wants to return to the future world he came from. 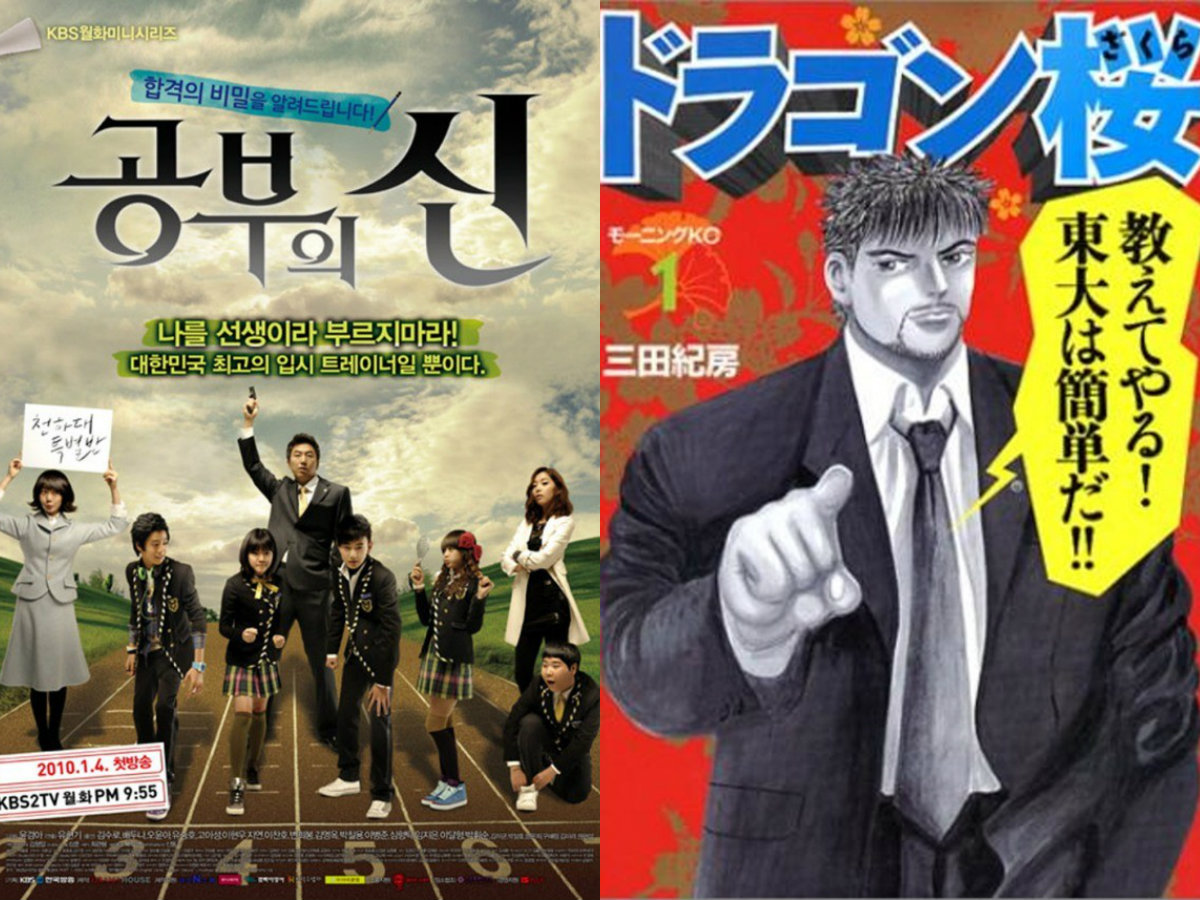 Based on the manga “Dragon Zakura” by Mita Norifusa.

“Master of Study” is quite possibly the drama with the biggest stars in it that most people have never heard about on this list. Granted, it was made before a lot of the younger actors in it became popular. 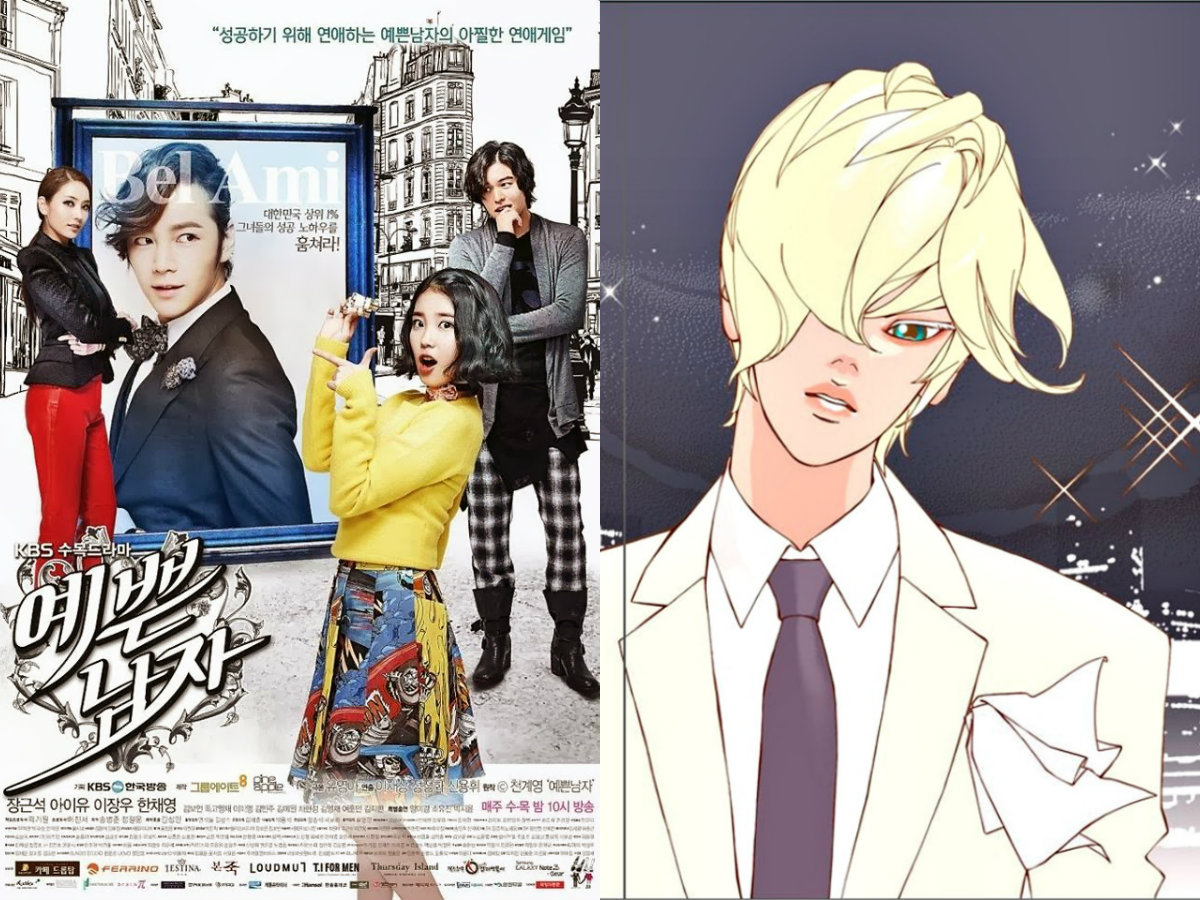 Based on the manhwa “Yebbeun Namja” (Bel Ami) by Chon Kye Young.

An absolutely hilarious and ridiculous drama, “Beautiful Man” is a spectacular romantic comedy with two huge stars in it! If you are looking for a cute romance, then this is perfect!

Dokgo Ma Te (Jang Geun Suk) is acknowledged as the world’s most attractive man and he tries to become famous and successful because of his perfect image. While he is pursing his dream of becoming living perfection, he begins to get more involved with unsophisticated Kim Bo Tang (IU), his childhood friend, who has always liked him! Will this picturesque lead man get the girl, or will she be stolen away while he admires his reflection?

At first this drama seemed to take place in a fictional world, but let us remember that Jang Geun Suk is playing the main lead and he is quite beautiful!

Cheese In The Trap 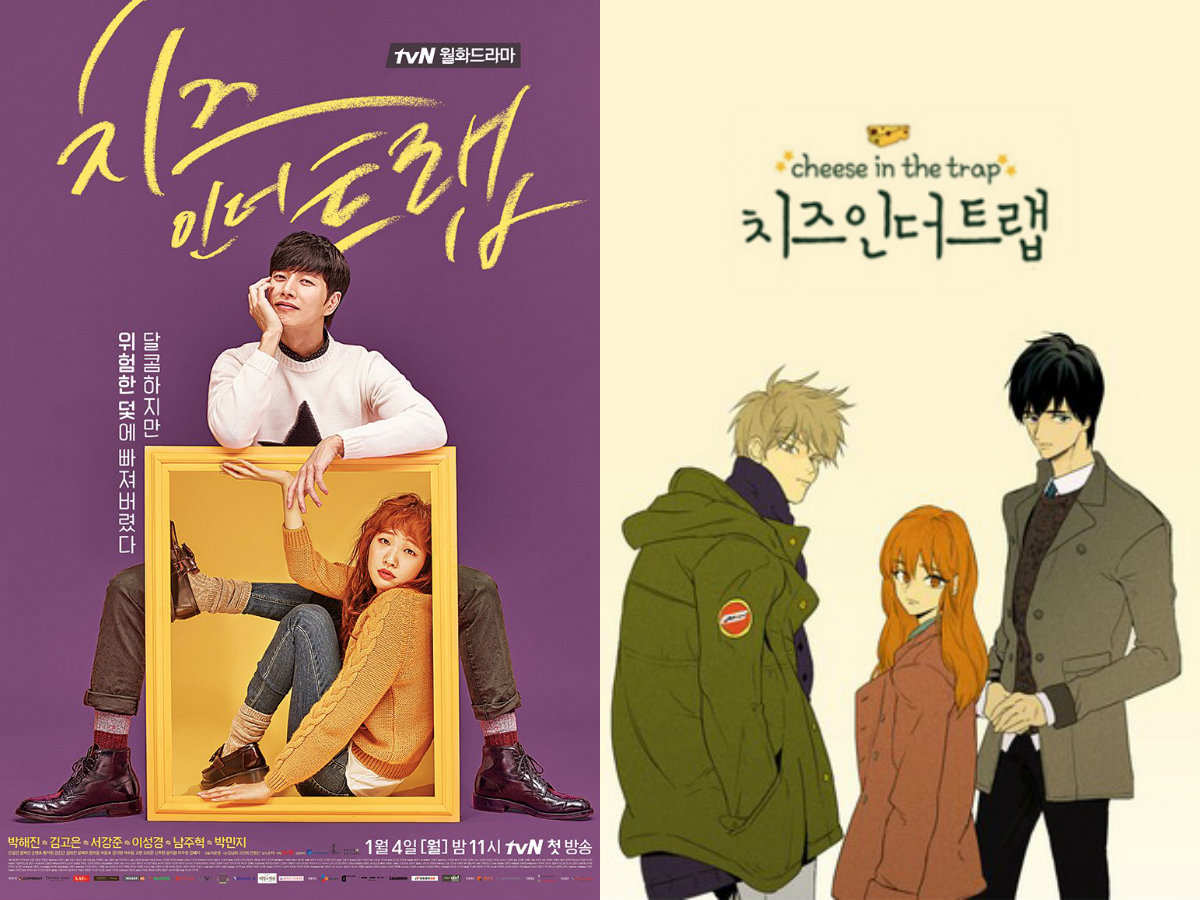 Based on the webtoon “Cheese In The Trap” by Soonkki.

It would be amazing if a handsome upperclassman suddenly shows interest and begins to help you, but when this exact situation happens to Hong Seol (Kim Go Eun) everything seems to go wrong! Hong Seol is a hardworking student, determined to pass her college classes, when distinguished classmate Yoo Jung (Park Hae Jin) begins to pursue her. Unrelenting, Yoo Jung convinces her of his interest in her, despite her doubts, and proves himself to be quite the gentleman. However, things begin to change when his estranged friend, Baek In Ho (Seo Kang Joon), shows up and becomes involved with Hong Seol and her friends.

Let us know which comic-based dramas you enjoyed the most!

t0ky0nights is a K-pop enthusiast, whose interests include many forms of Japanese, Chinese, and Korean entertainment. She can be found dancing or writing articles, as well as lyrics and fiction, most of the time. You can find her on Instagram here.