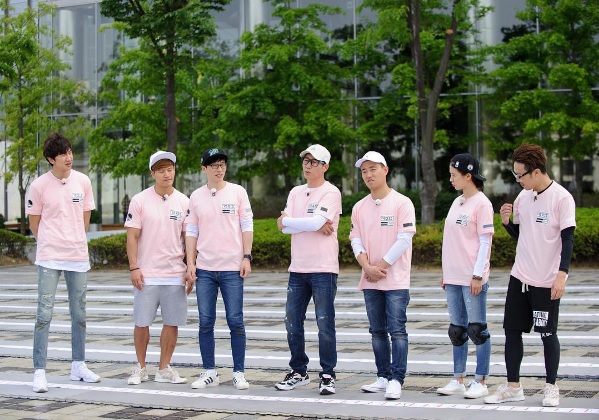 On May 22, SBS’s “Running Man” will celebrate its 300th episode. The variety program has continued without rest since it started airing in July 2010, making this celebration very special and meaningful for the seven members and the staff.

Stepping up to the role of main PDs after Jo Hyo Jin and Lim Hyung Taek are Lee Hwan Jin, Jung Chul Min, and Park Yong Woo, who have been working hard at incorporating fresh challenges in the show while still keeping its basic format.

PD Lee Hwan Jin sat down for an interview where in he shared his sentiments about the 300th episode, and the direction he plans to take the show.

He states, “I want to thank the viewers who have been watching until now. It’s because of them that we’ve come as far as 300 episodes. We’ll work harder to deserve even more support.”

The PD then reveals that the theme of the upcoming 300th episode special is “7 versus 300.” He explains, “Every mission will have something to do with the number 300, including writing on 300 meter paper, eating 300 bowls of food, and battling against 300 Yonsei university students. It is the largest among our special episodes so far.”

The special feature will be broadcast over two weeks, and he shares that it took them two days to film it. He continues, “The challenges were filled with great tension, and it felt very real. There were also some surprising twists that viewers can look forward to.”

When asked if there is a special reason why the episode features boy group BTS, Lee Hwan Jin answers, “BTS also has seven members, and the rewards from the challenges are to be donated for a good cause so we needed people who are youthful and energetic. As their name ‘Bulletproof Boy Scouts’ suggests, they are very powerful when they perform. Moreover, we felt sorry towards Rap Monster about his first appearance on ‘Running Man.’”

He reveals that BTS was very thrilled to be on their first variety show appearance as a complete group. He says, “It was cute how their ears turned red. They started with so much energy but they’re frailer than you would think, and that made them even cuter. Rap Monster, V, and Jungkook were very active.”

Finally, the PD commented on the viewers’s disappointment that the iconic name tag ripping game has not been included in recent episodes.

He states, “Name tag ripping is part of the identity of ‘Running Man,’ so of course we plan to do it. However, as you may know, its usual results are obvious. On the other hand, it might become too complex and hard to watch if we change the rules to show varied outcomes. This is our dilemma.”

He continues, “This is why we have been considering many ways to innovate the game. We are preparing fresh changes to keep in the long run. It will become a hybrid name tag ripping.”

Lee Hwan Jin shares that the producers all want to include name tag ripping on the show. He says, “We were assigned to think about games for a final challenge, and we thought only about name tag ripping. Earlier this year there was an episode where we tried levelling the playing field for all members, and we implemented phase one of name tag ripping’s evolution. There are more innovations to make after that, and we are still discussing how to go about them.”

Let’s wait and see what exciting surprises “Running Man” has in store for us in the future!

Lee Hwan Jin
Running Man
How does this article make you feel?