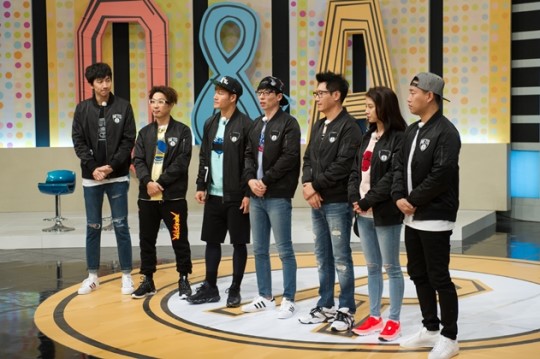 “Running Man” will be airing its 300th episode on May 22, and the producer of the show, Lee Hwan Jin, answers some questions regarding the members in commemoration of the special episode.

In a recent episode, actress Go Ara came as a guest and the “Running Man” members went in the water instead of her out of consideration. When asked why Song Ji Hyo gets treated just like any other member despite being a girl, the producer stated,

“Song Ji Hyo plays the ‘perfect’ team player in the show. I think this is why she is loved by so many people. I actually follow her words like she is my older sibling. It’s not enough to just say that she is easy-going. She’s more than that” and, “She always gives her 100 percent in every situation she’s in. I think that is very admirable and I am very thankful to her for that.”

The producer also had different things he wanted to say about each member, explaining, “Each and every member is lovable. Yoo Jae Suk is like the dean of the students. He leads the show as the senior entertainer, and his way of doing so is very trendy. No words are needed. I believe he raised the bar high for the quality of Korea’s variety programs.”

“Ji Suk Jin matches very well with Yoo Jae Suk, and Haha is a good support. Gary gives a uniqueness to our show that we really need. That’s why we have special episodes dedicated to Gary a lot, and he pulls through them very well with keen senses. Kim Jong Kook is like Darth Vader. He plays a very big role in ‘Running Man,'” and, “Lastly, Lee Kwang Soo is like the gem of the show.”

As many already know, Lee Kwang Soo is very popular in China. When asked if the producer can hint just how big his popularity is, he revealed, “I think [Lee Kwang Soo’s] popularity is comparable to Song Joong Ki’s popularity. He’s receiving that much love. Kim Jong Kook is also very popular. Male solo singers usually get lots of love in China. I think Kim Jong Kook’s physical strength and masculine charms add to his rise in popularity, too. Lee Kwang Soo is a special case, but I believe he receives a lot of love for his diverse charms and witty personality.”