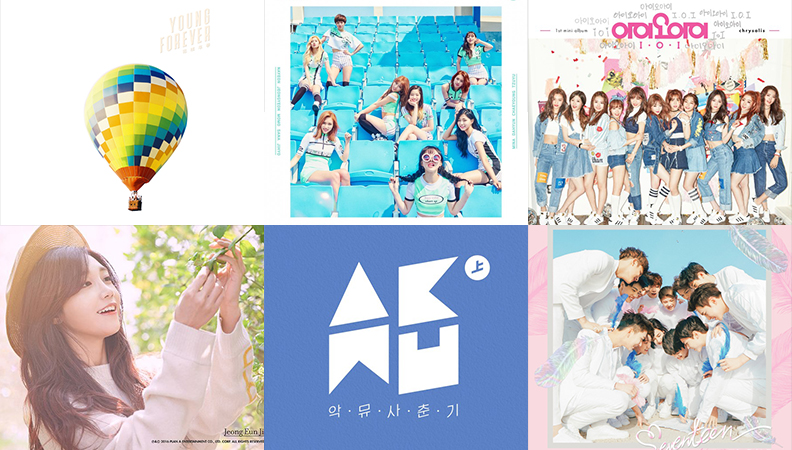 TWICE repeats as No. 1 with “Cheer Up.” Even though its score is not nearly as high as last week, the song was still the clear cut winner on our chart this week with consistent high scores on all chart sources. Congratulations again to TWICE.

Moving up seven spots to No. 2 is Akdong Musician’s “RE-BYE,” one of the two songs they have in the top five. This song is almost as consistent as “Cheer Up” but is behind it on most charts. As a result, “RE-BYE” finished at a respectable second this week and will try to overtake “Cheer Up” next week.

There are four new songs in the top 10 this week. Up 11 spots to No. 3 is BTS’ “Fire,” the title song of their special album “Young Forever.” It is an electronic dance song which is full of energy. It tells the listeners to live in the moment and forget the chaotic world. “Fire” picked up most of its points from music shows, winning Inkigayo, Music Bank, and M!Countdown last week.

Moving up nine spots to No. 4 is I.O.I’s “Dream Girl.” Perhaps the most anticipated female group debut this year, the 11 members of I.O.I is picked from the reality show “Produce 101.” “Dream Girl” is from their first mini-album “Chrysalis.” It is a dynamic dance song with synth sound and addictive chorus. I.O.I is expected to release four albums this year as a whole or sub-units. Fans will definitely see a lot of them.

Besides “RE-BYE,” Akdong Musician also has “How People Move” in the top five this week, moving up six spots to No. 5. Both songs represent the feeling of adolescence. “How People Move” has a more upbeat melody than “RE-BYE.” It is a folk and jazz style dance song.

Crush returns with “woo ah,” his second top 10 hit this year. It is the title track of his mini-album “Interlude.” This R&B song is about a guy who is amazed by a woman’s beauty, shouting “Woah!”