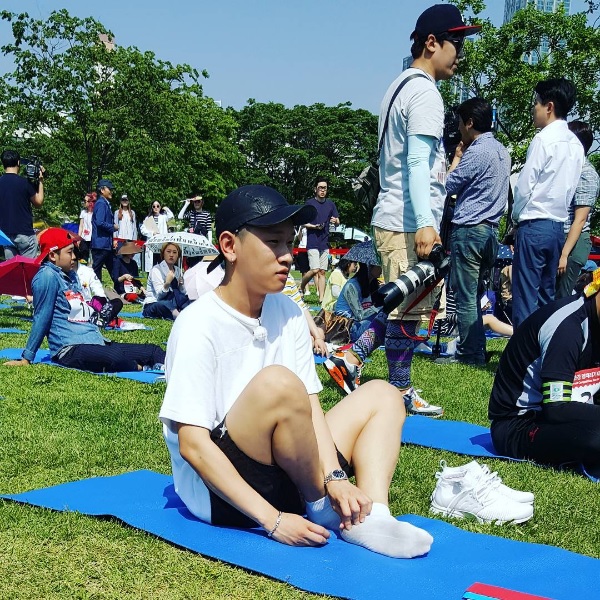 Singer Crush tried his hand at a spacing out competition.

Hosted by the Seoul Han River Project Headquarters, the “2016 Han River Spacing Out” event was held on May 22 from 3 p.m. to 6 p.m. at the Han River Park.

Spacing out refers to the act of staying still without thinking. The competition was held with the intention of encouraging people in these modern times to allow their brains to rest amid living their busy lives, always occupied by cellphones and laptops.

Participants attempted to space out without doing anything and falling asleep throughout the event.

The organizers used a device to measure the heart rate of the contestants, and whoever maintains the most stable heart rate is awarded with a trophy, a certificate, and a cash prize.

Singer Crush attracted attention when he was seen taking part in the contest. He said, “I wanted to let my brain rest because I’ve been so busy and out of it recently. I came to support the event without thinking anything.”

Onlookers who spotted the singer at the event took videos of him, one of which shows him participating in aerobic exercises to condition their bodies for spacing out.

In the end, Crush came out as the winner through a combination of votes and an assessment of his heart rate, which they found to be the most stable. When he ascended the stage for his award, he stated, “I’m in a daze. Thank you. I hope more people know about and participate in this great competition.”

He later posted a commemorative photo of himself onstage on Instagram, with the caption “They even checked our heart rates. In any case, I got first place. Spacing out contest,” expressing his gladness for winning the unusual competition.

Congratulations to Crush for the bizarre but meaningful award!