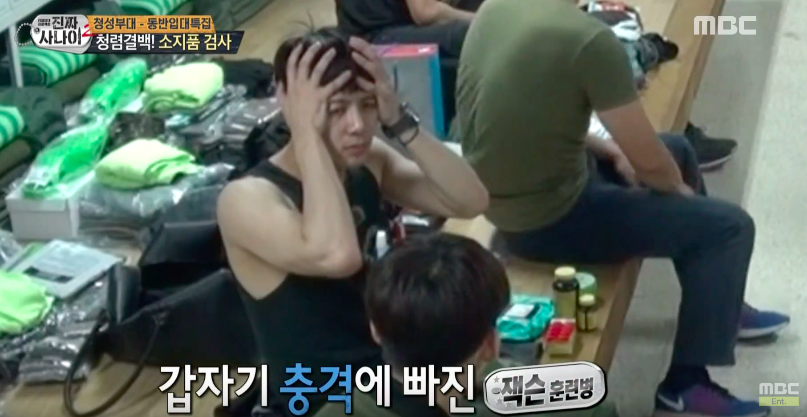 Watch: GOT7’s Jackson Can’t Believe His Organic Products Are Being Taken Away On “Real Men”

You’ll want to just give GOT7’s Jackson a hug after watching the latest episode of “Real Men 2.”

On the May 22 episode, the drill instructor inspects the belongings that the cast members brought with them.

During the inspection, Jackson is bewildered when he is told that his precious organic products are not permitted and will be taken away.

While the drill instructor goes through GOT7’s duffle, he finds a box of green tea and tells him, “Didn’t you know that no food items can be brought in.” Jackson just stares blankly.

BamBam chimes in, “So is it the same for cabbage puree?”

“Yes, it must all be turned over,” the drill instructor says.

“I apologize,” Jackson says without knowing he’s mispronouncing the words.

Jackson goes into shock again when the drill instructor tells the cast members that they must give up their personal toiletries because toiletries will be provided for them.

“Toothpaste… one’s own… May I not use my own toothpaste?” Jackson asks.

The drill instructor loses his patience and says, “Did you not hear me say earlier that supplies will be provided, so [personal] toothpaste and toothbrush are prohibited?”

“We also got our mist taken away,” Jackson adds. “My mist is also organic.”

GOT7
Jackson
BamBam
Real Men 2
How does this article make you feel?