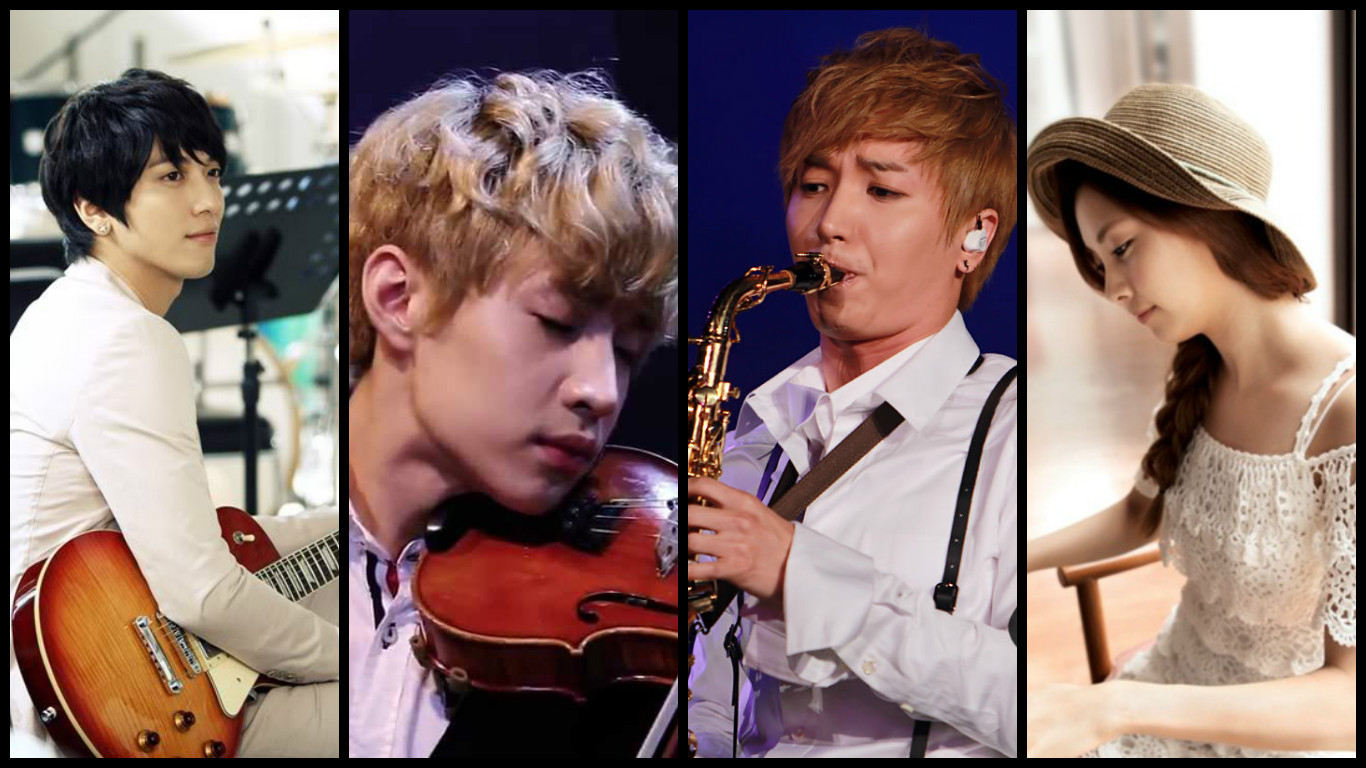 9 Instrument-Playing Idols Who Melt Our Hearts

K-pop idols can sing and dance like nobody’s business. They’ve spent training days, debut days, music show performances, and more showing us that they know how to evoke feels with their incredible high notes and fluid dancing. But they are more than that. Many of our favorite idols boast of instrumental talents as well. Let’s check out the most heart warming performances by our beloveds.

The four handsome gents of CNBLUE have made their names on rocking guitars, bass, and drums. There are so many times they have thrilled audiences with Yong Hwa’s jazzy keys, Jonghyun’s guitar riffs, Min Hyuk’s drum solos, and Jung Shin’s walking bass.

This talented solo artist and chart topper is a gifted pianist, composer, and singer has made the piano a part of her music from the beginning. It deftly weaves through her career as she paved her musical path through Japan and Korea.

(Listen to her deftly string together harmonies in “Wait for Me” before laying her signature sweet voice on top.)

American-born Jae of is not only a killer guitarist in JYP’s young rock band DAY6, but he’s a deft musician who gets creative with rhythms and makes them funky and fun. His guitar playing shows a unique sense of musical style that allows him to slip easily from playing in a band into playing solo.

This “K-Pop Star” veteran and recently debuted singer-songwriter Sam Kim has some of the cleanest guitar technique on the market, reminiscent of John Mayer and Johnny Lang. He brings a strong taste of the blues to the Korean music market as well as an extreme amount of talent.

(Listen to him create a colorful palette of sound using percussive sounds, snazzy runs, and funktastic chords in “No Sense.”)

While most of our idols play classical Western instruments, B.A.P’s Himchan is trained in traditional Korean instruments, notably the janggu, a two-headed drum played on its side. His sense of rhythm in B.A.P is mirrored by his skills on the traditional drum. If you thought he was awesome as an idol, wait until you watch him rock the janggu!

B.I.G.’s Benji is hot off a recent album drop so it’s totally appropriate to talk about his lightning fast fingers that won him admission to Juilliard. He’s a beautiful violinist, which compliments his hard-hitting singing skills.

(Listen to Benji play the note-heavy violin solo from Vivaldi’s “Winter” from the “Four Seasons.” His colleagues in the audience sat with open mouths as they watched his nimble fingers fly over the ebony fingerboard!)

Leeteuk is one of the original K-pop idols of modern K-pop and it should come as no surprise that he has a few sexy tricks to pull out on stage for his adoring public, like playing the saxophone. And pull it out he does, time and time again. Each time we eat it up because there ain’t nothing smoother than a saxophone.

(Leeteuk making his saxophone croon to fans in Osaka.)

As the daughter of a piano school chairman, it is only fitting that Girl’s Generation’s and subgroup TTS’s Seohyun has more than a few piano skills up her stylish sleeve. She’s kept her fingers warm over her years as a Girl’s Generation member and has even collaborated with other artists to show her stuff!

(Seohyun shows off Chopin’s virtuosic Fantasie Impromptu during a filming for MTV.)

A post about K-pop instrumentalists can’t be complete without Henry, the man who brings violin, piano, and guitar performance into so many of his stages, songs, and television appearances. From the tender age of five, Henry began to study instrumental music and that has carried into his professional life with SM Entertainment.

(We have him covering his popular Trapped and rocking out some Chopin, just like Seohyun. Chopin is one of classical music’s most famous piano composers.)

Which is your favorite K-pop instrumental moment, Soompiers?

*A previous version of the article incorrectly listed Henry as a member of EXO-M and has been updated for accuracy.