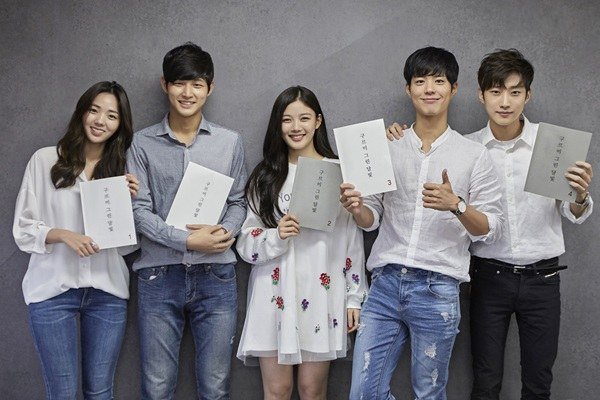 The photo is from their first script reading session which was held on May 26. More details about each character have been revealed!

Park Bo Gum is Lee Young (Crown Prince Hyomyeong). He is described as appearing cold on the outside but warm on the inside. He’s serious with a picky personality but still bright and playful being 19 years old. A new type of palace romance is expected to bloom between him and Hong Ra On (Kim Yoo Jung) who he has a reunion with at the palace after having been humiliated by her in the past.

Kim Yoo Jung is Hong Ra On who disguises herself as a eunuch. She unexpectedly becomes accepted as a eunuch for the palace. She later finds out that a scholar with whom she has an ill-fated relationship with is actually the crown prince. This is how their unpredictable palace romance story begins.

Jinyoung completes the love triangle between Lee Young and Hong Ra On as Kim Yoon Sung. His character is a flower boy scholar who comes from a prestigious family and lacks nothing. Conflict begins when he starts to get curious and interested in Hong Ra On.

Chae Soo Bin is the crown prince’s wife Jo Ha Yeon. She is a beautiful and ambitious character who proposed a marriage of convenience to Lee Young. Her pride suffers when she finds out the truth about her husband only having eyes for a eunuch. As the romance develops between Lee Young and Hong Ra On, Jo Ha Yeon changes.

Lastly, Lee Seo Won will be Kim Byung Yeon. His character is Lee Young’s childhood friend. Despite having a simple personality and being unable to notice things at time, he is a source of refuge to rely on and confess everything to for Lee Young. He is also an important person to Hong Ra On.

“Moonlight Drawn By Clouds” will air its first episode on August 15.