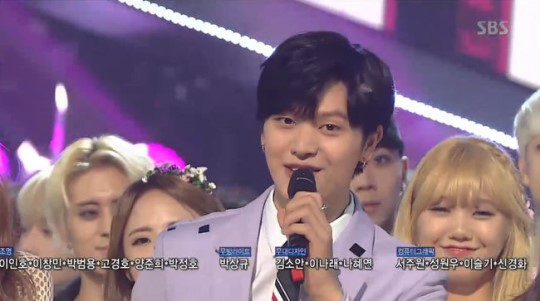 This week’s live broadcast marked the last day for Yook Sungjae as one of the show’s hosts. After joining the “Inkigayo” crew last September, he entertained viewers with his co-hosts GOT7’s Jackson and actress Kim Yoo Jung. With Yook Sungjae’s departure, Jackson is now the only fixed host of the show.

At the end of the May 29 broadcast, the idol shared how he feels about stepping down as the host. “I want to thank my fellow hosts Jackson and Kim Yoo Jung. Thank you for making happy memories with me,” he smiled.

“I truly learnt a lot while appearing on ‘Inkigayo.’ I’ll work even harder in the future,” he said and followed up with a polite 90 degree bow.

BTOB
Yook Sungjae
Inkigayo
How does this article make you feel?