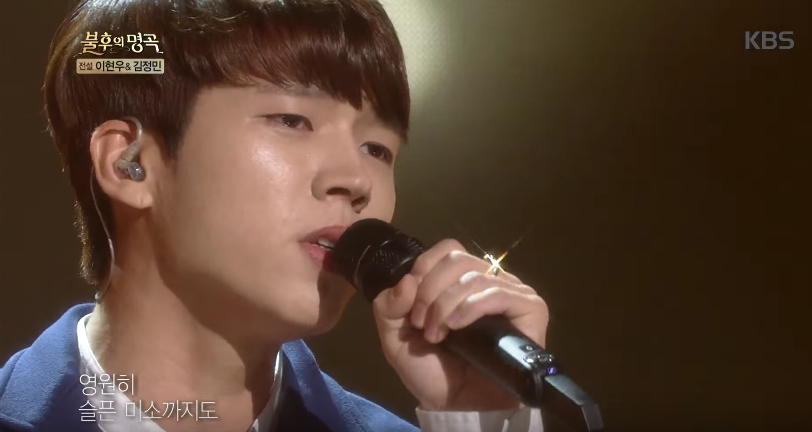 On the June 4 broadcast of KBS2’s “Immortal Song 2,” INFINITE member Woohyun performs on the show for the first time in 3 years.

Woohyun is the sixth contestant to take the stage. “Although I’m the maknae (the youngest), I came out here to win,” Woohyun says. He then takes the stage and touches the crowd with an emotional and powerful rendition of Kim Jung Min’s “Last Promise.”

Singer-songwriter Jung Jae Hyung comments, “He’s so pure. He has a ballad sound that makes it easy to get immersed [into the song].”

Singer Lim Jeong Hee adds, “Woohyun has become a formidable contestant. I think Woohyun might win. I choked up [listening to him].”

“As you continue singing, you get tainted. In terms of sincerity, I think Woohyun has excelled even us,” Park Ji Hyun says.

Woohyun’s performance garnered 439 votes, the highest score that any idol singer logged on the episode. Woohyun beat out Chung Dong Ha for the round, but the final winner was V.O.S.

Congratulations to Woohyun on an awesome performance!

You can catch his rendition of “Last Promise” below.

Support the artist by buying Write.. from YesAsia
Nam Woohyun
INFINITE
Immortal Songs
How does this article make you feel?