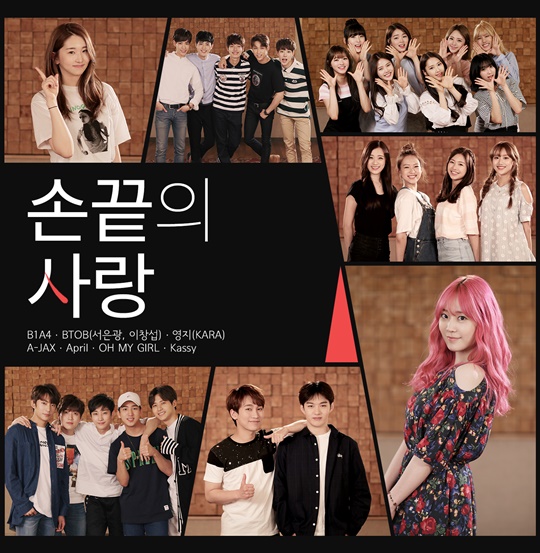 As part of a campaign to end cyber bullying and create a healthier Internet environment, several talented K-Pop groups and artists have teamed up to release a new track entitled “Love From the Fingertips.”

The track features B1A4, BTOB’s Eunkwang and Changsub, April, Oh My Girl, A-JAX, Heo Youngji, and Kassy, and was revealed for the first time at the 2016 Dream Concert on June 4.

“Love From the Fingertips” was produced for a campaign led by the Korea Entertainment Producers Association, Korea Entertainment Management Association, and Korea Creative Content Agency to help stop the spread of unfounded rumors and the posting of hateful comments, both about regular citizens and celebrities. As part of the campaign, the artists have also recorded short video messages.

As the use of the Internet and smart phones increases even more, many people suffer on a daily basis from cyber bullying and hateful comments, with some celebrities even having to take legal action against netizens. The campaign aims to encourage people to fill up comments with friendly, kind messages rather than hateful ones.

In the song, the artists ask people if they know how much the words they say on the Internet can hurt people. “Let’s support each other, and compliment each other,” they suggest in the track. “You can say things that make our world more beautiful, like ‘It’s great,’ ‘You’re cool,’ ‘Keep it up,’ and ‘I believe in you!’ It’s the love you send with your fingertips.”