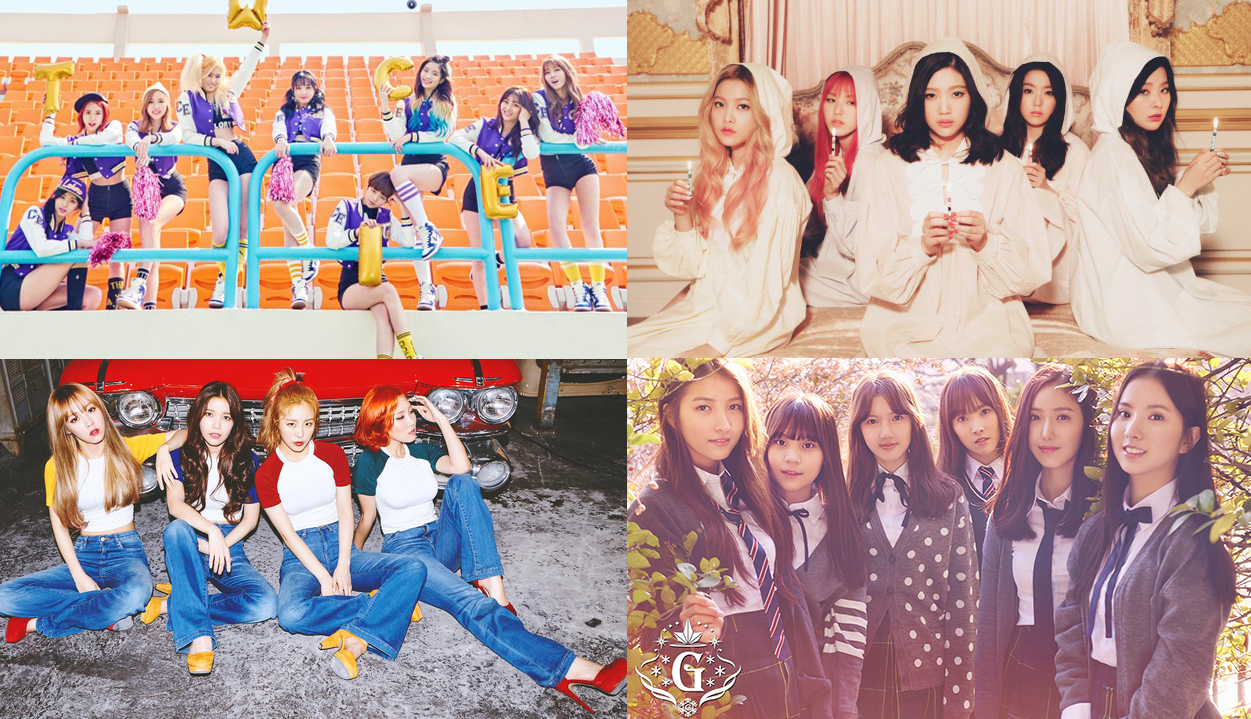 As more and more new groups debut, it’s only natural that some of them shoot straight for the limelight. Groups like 2NE1, Girls’ Generation, and KARA were the hottest girl groups from the so-called “second generation” of K-pop, but some groups who’ve debuted in the last two years are quickly becoming the faces of the third generation.

Here are some of the hottest current girl group acts right now, listed in no particular order.

TWICE debuted late in 2015 as JYP’s first girl group since miss A. The group exploded onto the K-pop scene with their super-popular debut song, “Like OOH-AHH,” earning millions of views on YouTube. As it stands, the song currently has the most views of any K-pop debut song with over 69 million views. Despite an early scandal involving maknae Tzuyu, the group remains one of the strongest rookie girl groups. Check out their most recent hit, “Cheer Up.”

MAMAMOO is more often considered a vocal group than an idol group because of their outstanding vocal talent, as well as considerable skill in rap and performance. The group has set themselves apart from the crowd by forgoing both the suggestive, sexy concept and the young, innocent concept, instead favoring fun and silly music videos that showcase their powerful vocals. Their hit song “Um Oh Ah Yeh” cemented their reputation as Korea’s girl crush, and their most recent hit “You’re The Best” is a definite toe-tapper.

The youngest girl group out of SM Entertainment debuted in the summer of 2014 as a quartet, but later added a member to solidify themselves as a five-member group. All of the members except for Joy were in the first generation of SM Rookies, gaining popularity even prior to their debut and proving the potential of SM trainees. The group took their first music show win with “Ice Cream Cake,” and the fall 2015 hit “Dumb Dumb” was one of the most popular songs of the season.

Arguably having one of the fastest-growing careers, GFRIEND has taken the K-pop scene by storm with back-to-back hits. The group got international fame when a performance of “Me Gustas Tu” where they suffered multiple falls went viral, and the members were praised for their professional demeanor throughout the performance. Their most recent hit “Rough” swept the weekly music charts, and the girls took home win after win just barely a year after their debut.

Which other girl groups do you think are popular right now? Let us know in the comments!

Update: The article has been updated to reflect that “Um Oh Ah Yeh” is not MAMAMOO’s debut song.

MAMAMOO
Red Velvet
GFRIEND
TWICE
How does this article make you feel?