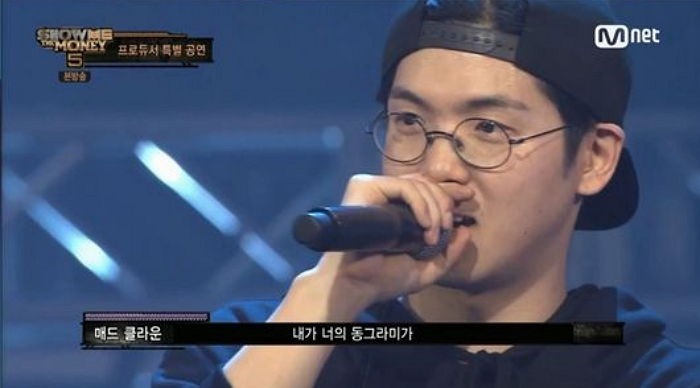 Mad Clown’s romantic gesture to his wife during the latest broadcast of Mnet’s “Show Me the Money 5” is just too sweet!

On the June 10 episode of the show, the four producer teams put on special performances in front of an audience of 2,000 people as a part of the team selection process.

Leessang’s Gil and Mad Clown perform a medley of old and new classics, such as “Bad Blood,” “Rap as a Religion,” and “Rush.”

Before giving a much wanted encore, Gil suddenly reveals, “Mad Clown’s wife is actually here today, in the audience,” and suggests that the other rapper should say something to her.

While he is taken aback by the statement, Mad Clown still gives a romantic shoutout to his wife. He says, “In this skewed and harsh world, I’ll become your circle,” before shyly exclaiming that he feels really embarrassed.

Meanwhile, the rapper married his non-celebrity wife on May 15, after a year of dating.

Show Me the Money 5
Mad Clown
How does this article make you feel?