Park Shin Hye Is Ready To Kick Some Ass On “Doctors”

Following the conclusion of SBS’s “Jackpot” this week, Park Shin Hye and Kim Rae Won’s “Doctors” will be taking over the Monday-Tuesday time slot on Monday, June 20.

“Doctors” is about a tough, rebellious woman with a difficult life, Yoo Hye Jung (Park Shin Hye), who studied to become a doctor with the help of her mentor Hong Ji Hong (Kim Rae Won). Now a resident at a major hospital, she starts working with fellow residents Jung Yoon Do (Yoon Kyun Sang) and rival Jin Seo Woo (Lee Sung Kyung), and crosses paths again with her old mentor, for the love story of a lifetime.

In the stills released on June 12, we’re met with an eyeful of action and an unspoken promise of wrath from Park Shin Hye, who’s clearly ready to throw down. Hair will be pulled, and fists will fly in the highly anticipated premiere of “Doctors.”

A drama affiliate said, “We rented a nightclub for the day to shoot this scene, and we had about 200 extras. It was tough, but we had a lot of fun. There’s a cameo in this scene, too, so please look forward to it.”

Park Shin Hye had mentioned in a past interview that she wanted to try action, and it looks like she — at least in part — is fulfilling her wish. She’s quite ready to dish it out, having trained in martial arts for this drama, learning everything from the basics to advanced techniques, although it’s yet unknown how much action will be in the drama. 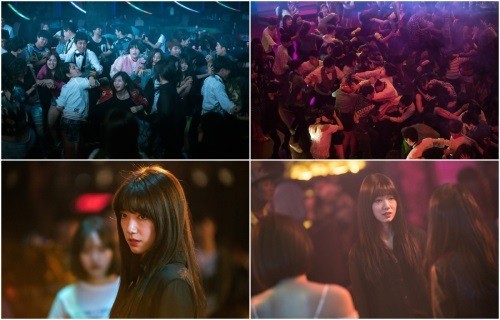