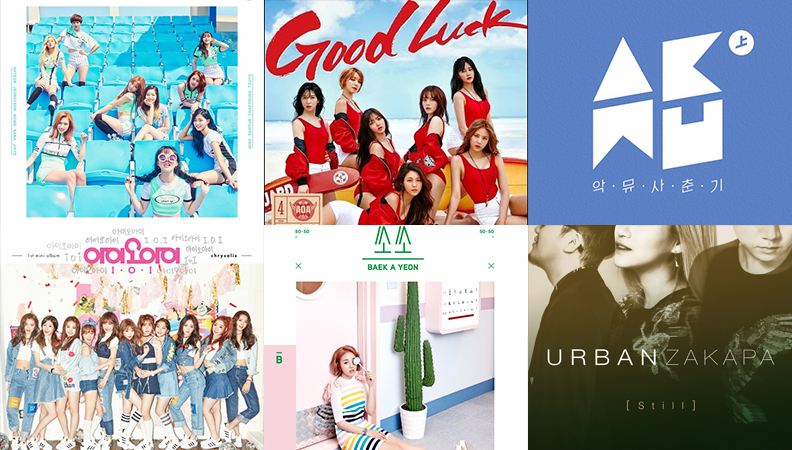 Our chart has a different result than most of the Korean charts this week as AOA’s “Good Luck” moves up one spot to take No. 1. Despite having a lower score than last week and not picking up any wins from music shows last week, “Good Luck” was able to win on our chart due to its high score on Soompi Airplay. Congratulations to AOA.

Moving up 11 spots to No. 2 is Baek Ah Yeon’s new song “So So.” Carrying on the success of her breakthrough hit “Shouldn’t Have” from last year, “So So” is a similar style R&B ballad in which Baek Ah Yeon took part in writing the lyrics. She also stars in this song’s MV about our common desire to fall in love even when we are not lonely. “So So” gave Baek Ah Yeon her first wins on music shows taking home Inkigayo and M!Countdown’s top spots last week. Let’s see if it will become her first No. 1 song on our chart next week.

There are three more new songs in the top 10 this week. Moving up 12 spots to No. 6 is Urban Zakapa’s “I Don’t Love You.” It is the title song from their mini-album “Still.” Featuring Urban Zakapa’s vintage acapella style ballad, the trio’s diverse vocals are met with acoustic guitar sound and string instruments. The lyrics are a heart breaking story about a devastating breakup. “I Don’t Love You” was a consensus winner on major internet chart and also GAON chart last week.

Block B’s Park Kyung has his second solo top 10 hit “Inferiority Complex” this week, moving up 10 spots to No. 7. Last year he surprised fans from his duet “Ordinary Love” with Park Bo Ram. This time he teams up with GFRIEND’s Eunha on “Inferiority Complex.” It is a contemporary hip-hop song Park Kyung took part in composing and also writing the lyrics himself. Park Kyung and Eunha also star in the song’s MV as a cute couple.

Moving up five spots to No. 10 is SHINee’s Jonghyun. After topping the chart with “Deja-Boo” last year, Jonghyun also wrote Lee Hi’s No. 1 song “Breathe” earlier this year. Now he finally releases his first full length album. The title track “She Is” made the top 10 this week. It is a funk song with bass elements. Jonghyun wrote this song together with fellow singer Crush. “She Is” won on Show Champion last week and looks to move up in the top 10 next week.