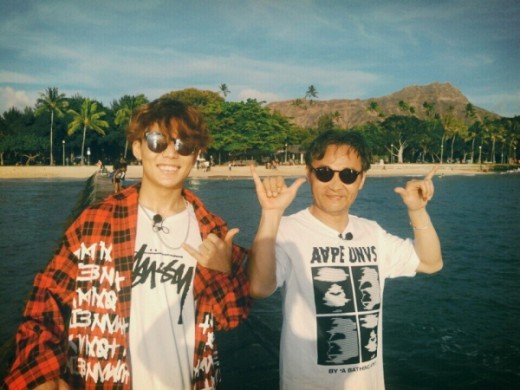 tvN’s “Daddy And Me” has shared a new still of iKON’s Bobby and his father on their Hawaii trip!

The show follows male celebrities as they take their fathers on trips, with each pair going to a different part of the world. Bobby and his father were announced as part of the original line-up of the show, along with Kim Jung Hoon, Eric Nam, Roy Kim, Nam Hee Suk, Choo Sung Hoon, and Yoon Park.

Although two episodes of “Daddy and Me” have aired so far, the show has been focusing on Eric Nam, Choo Sung Hoon, and Kim Jung Hoon’s adventures with their dads.

“Daddy and Me” has now shared that we’ll be seeing footage from Bobby and his father’s trip starting in the third episode, which will air on June 16. In a photo released on June 13, Bobby and his dad smile for the camera in front of the ocean, looking totally thrilled to be on a trip together.

It’s said that the two act like they’re friends more than father and son while they’re on the their travels, which is different from some of the other father-son pairs who are a bit awkward together on their own.

Are you excited to see Bobby and his father on “Daddy and Me”?

iKON
Daddy and Me
Bobby
How does this article make you feel?