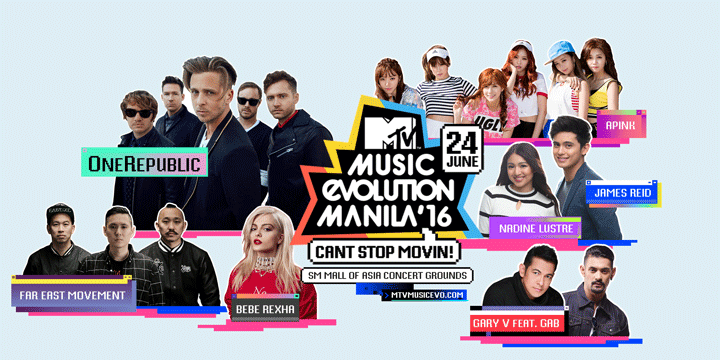 Attention Soompiers! A fusion of Asian and Western acts will meet in Manila, Philippines for a one of a kind music festival on June 24!

MTV Asia is holding the MTV Music Evolution in the Philippines once again and they have a slew of performers who are raring to go on stage including American artists, OneRepublic and Bebe Rexha! Asian-American hip hop group, Far East Movement will be joining in too! (Who remembers when INFINITE’s Hoya danced to their track “Bang It To the Curb”?)

You can also look forward to seeing local acts including the popular singer-songwriter, Gary Valenciano and his son (who followed in dad’s footsteps) Gab. Pop darlings (and adorable onscreen and real life couple) James Reid and Nadine Lustre will also be there so be ready to swoon at the cute.

Lastly, a Soompi favorite is part of the lineup and it’s none other than APink! You read that right. The lovely girls are included in the roster! This is not a drill. I repeat: this is not a drill!

Missed your chance at scoring tickets? Fret not. We got even better news for you Soompiers – we are giving away 25 pairs of mosh pit passes to the show! All you have to do is enter using the widget below:

Winners will be contacted via Twitter DM on June 20.

UPDATE: The contest is closed and the winners have been contacted via Twitter DM. Thanks for joining, everyone!

For more details and updates, check out the MTV Music Evolution website. Don’t forget to check out their Facebook page too!

Soompi Spotlight
Giveaway
How does this article make you feel?