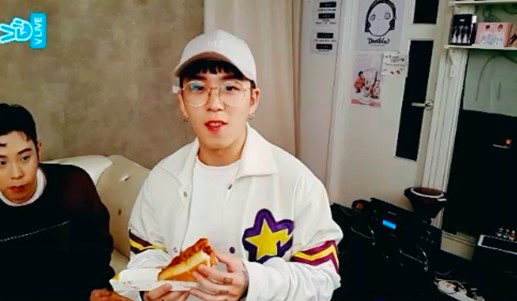 On June 15, the members of Block B met with their fans through the Naver V app.

During the live broadcast, a fan asked Taeil about his collaboration with f(x)’s Luna at KCON France, where the two singers sang a duet version of Zico’s “It Was Love.”

Taeil said, “I met Luna for the first time at the rehearsal on the day of the concert. We had to start the performance as soon as we met so it was awkward. As soon as we finished we said to each other, ‘What are we going to do?’”

He added, “I saw the broadcast later and I think we harmonized well so I feel good about it. It was fun to do a duet and I’m grateful to Luna.”

Park Kyung teased his fellow member by adding, “When you were filming the VCR, I felt that the atmosphere between you two was weird.”

Taeil explained, “Zico tried to make it less awkward for us but he made it even more awkward. So we ended awkwardly. I hope that we can become closer the next time we meet.”

You can watch their performance and more from KCON France here!

Block B
KCON 2016
KCON France
f(x)
Luna
How does this article make you feel?