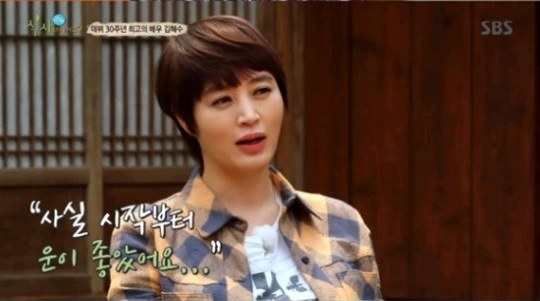 An old clip of Kim Hye Soo from when she debuted at 16 years old was revealed on the June 19 episode of SBS’s “How to Eat and Live Well.”

To surprise her for the 30th anniversary of her acting career, MC Kim Soo Ro prepared an old video of her at the 1987 Baeksang Arts Awards, where she was crowned Rookie of the Year for the 1986 film “Ggambo.”

In the video, the 16-year-old Kim Hye Soo could be seen with her unchanged beauty, speaking calmly and eloquently for her age in an interview.

Kim Hye Soo was embarrassed watching the video, exclaiming, “Oh my, oh my,” entertaining the staff around her.

She also complimented the good looks of the young Park Joong Hoon when she saw him in the footage and commented, “He looks cute when he talks, but his voice is really funny.”

As Kim Hye Soo reminisced, she said, “I don’t remember much. I do recall following the assistant director around and complaining that it was so cold my feet were freezing.”

How to Eat and Live Well
Kim Hye Soo
How does this article make you feel?