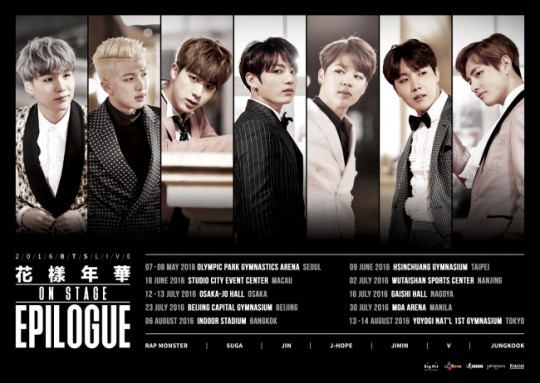 BTS Sells Out All The Concerts On Their Asia Tour

BTS can add another notch to their impressive record as they recently sold out all 14 concerts on their Asia tour.

On June 25, Big Hit Entertainment revealed that the 144,000 tickets for “2016 BTS Live HwaYangYeonHa Onstage: Epilogue Asia Tour” have all been sold. The tour covers 14 concerts across ten cities in Asia.

BTS had previously sold out tickets for their Seoul Olympic Park Gymnastics Arena concert in May as soon as they went on sale. In June, they sold out their concerts in Taipei and Macau within five seconds.

They also have concerts in Nanjing, Beijing, Osaka, Nagoya, Bangkok, Manila, and Tokyo, all of which sold out their tickets soon after they were made available. So far, BTS has completed three stops on their tour and are currently in the United States for KCON NY.