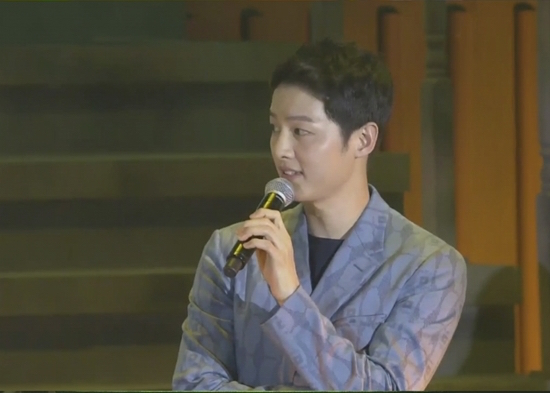 On June 25, Song Joong Ki held his latest fanmeeting in Taipei, Taiwan, where he truthfully revealed his thoughts on various topics.

He talks about how before he wanted to become an actor, he dreamt of being a member of the Korean national speed skating team but gave it up because his skills weren’t up to par.

Song Joong Ki is then asked when he thinks that he made right career choice, to which he replies, “Right now.” He explains how he’s learned a lot from the last nine fanmeetings he’s had while greeting the fans face to face. Of course as an actor, he gets thrilling sense of excitement being in front of the camera. However, it’s when he experiences the fans’ love in person that he believes he’s made the right choice becoming an actor.

He continues to show his affection for acting, and says, “Even 30 years later, I want to act in a age-appropriate role. I will be less popular, and there will most likely be less roles available [to me], but I think that I will be able to act well according to my age. I want to continue to act in the future.”

Song Joong Ki also reveals, “If she’s okay with it, I would want to act with Song Hye Kyo 30 years from now as well.” The two actors were much loved for their roles and chemistry in KBS2’s “Descendants of the Sun.”

Meanwhile, the actor also sang one of the OST tracks from the popular drama, and singer Gummy appeared as a special guest as well.