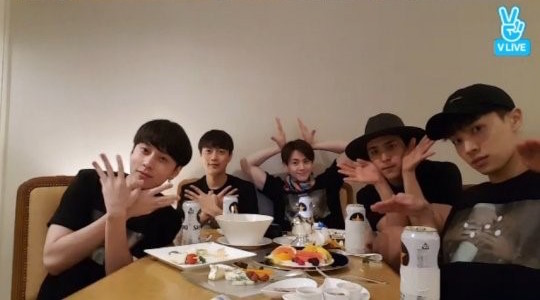 On June 26, BEAST hosted a live broadcast via Naver V App entitled “Having Waited Like This, Let’s Wait Together” (working title).

“We prepared this broadcast so that we could wait [for the release] together with anticipation,” the members explain, as they enjoy food and alcohol.

Member Yong Jun Hyung says their comeback album contains “gem-like songs,” ranging from songs they promoted with in Japan to songs that fans were able to peep at their concerts.

Maknae Son Dongwoon says, “Since this is our first album in a while, I want to thank fans for waiting.”

With regards to their first place promise, the members throw Yoon Doo Joon under the bus, “Yoon Doo Joon has been dancing this amazing butt dance these days. He will dance for us even with just underwear on.”