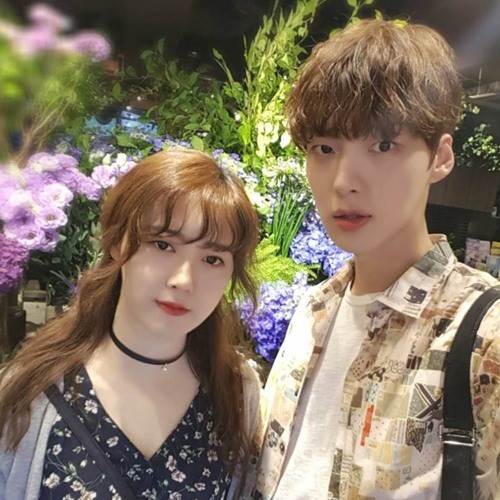 On June 26, Ahn Jae Hyun shared a photo with his new wife Ku Hye Sun, in which the pair stand next to each other against a backdrop of flowers. As the caption, he simply adds emojis of a mouse and a rabbit. The emojis seem to be symbols for the pair, since Ku Hye Sun was born in a year of the rat (1984) according to the Chinese Zodiac, while Ahn Jae Hyun was born in a year of the rabbit (1987).

It looks like the photo was taken on the same day as a ridiculously sweet video that Ahn Jae Hyun uploaded last week, in which Ahn Jae Hyun playfully runs after Ku Hye Sun with his hand outstretched and making adorable aegyo noises, she pretends to run away, and the newlyweds then hold hands.

Ahn Jae Hyun and Ku Hye Sun starred together in the drama “Blood” in 2015, and news broke in March of this year that they had been dating since wrapping up filming on the show. The couple officially registered their marriage last month.