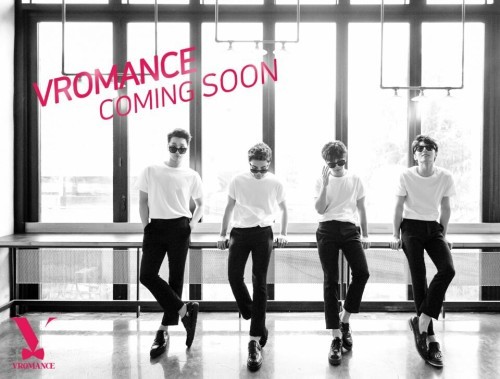 MAMAMOO’s brother group VROMANCE will soon be making their debut!

VROMANCE’s four members are leader Park Jang Hyun, Park Hyun Kyu, Lee Chan Dong, and Lee Hyun Suk. All four members of VROMANCE reportedly have very impressive vocal talents (like their RBW label mates MAMAMOO), and have worked as vocal trainers for idols as well as recorded guide songs for other artists. In addition, Park Jang Hyun and Park Hyun Kyu previously recorded the track “Love Is…” for the soundtrack of “Heirs,” and Park Jang Hyun released the track “Already Winter” with Huh Gak back in February.

On June 27, VROMANCE shared teasers on their official Facebook page for their upcoming debut and announced that they will be releasing their first mini album “The Action” in early July, featuring the title track “Girl Friend.” The song is described as being funky and fun, with a swing-inspired feel, that’s bound to challenge any preconceptions of male vocal groups only putting out ballads.

RBW describes them as a “vocal group that keeps the traditional feel of other vocal groups, while at the same time being versatile and able to pull off a variety of different genres, including fun and trendy music.” They add that the group’s been working hard to prepare for their debut for four years with some of the country’s best producers, and that their album will be something that people from all age groups can enjoy.

Ahead of their comeback, VROMANCE will be holding a special busking event in the neighborhood of Hongdae in Seoul on July 2.

MAMAMOO
RBW
VROMANCE
How does this article make you feel?