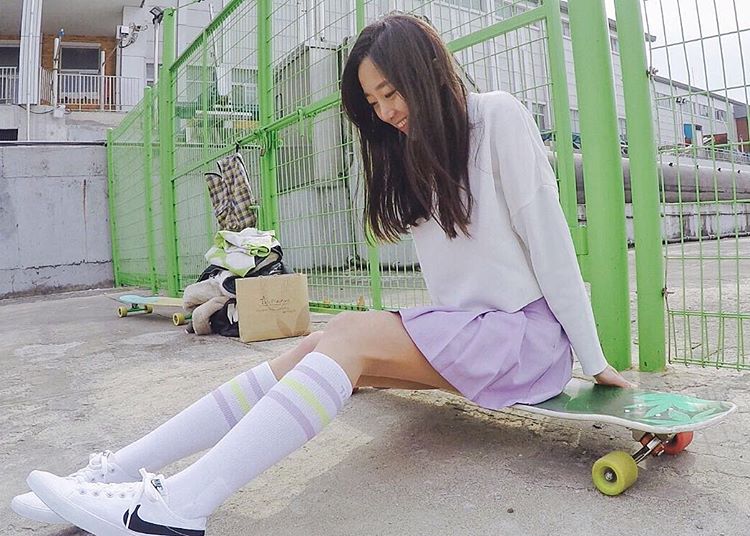 You may have already seen viral videos of longboard sensation Ko Hyojoo fluidly skating through the streets of Seoul. The app designer-slash-longboarder has gained fame throughout Europe and Asia for her seemingly effortless moves.

Now the Goyang native has been featured by Vogue’s online site with an exclusive interview and a short video titled “Longboarding through Seoul.” In the video, Hyojoo slides, twirls, and zips along the parks and neighborhoods of Seoul while showing off some chic skater fashion: an orange knit jumpsuit, a blue top with blue striped pants, and a pink skort paired with a T-shirt – sometimes with her signature striped tube socks.

While Hyojoo has traveled to Barcelona, Berlin, Madrid, Paris, and Taipei to show off her signature moves, she maintains her day job in Seoul. She works as a user interface designer for the mobile messaging company Line, where she was part of a team that developed a selfie app called B612 (which we raved about last week). The team won the prestigious Red Dot Award for their achievements in design.

But of course, she’s best known as Korea’s most famous longboarders. On Instagram, she shares longboarding videos to her 265,000 followers around the world.

In the interview, Hyojoo reveals that she’s a relative newcomer to the sport, having started only two years ago. Looking for an extracurricular activity to liven up her spare time, she purchased a board at her local skate shop, and was immediately hooked from her first ride. She discusses some of her favorite moves, such as the “nollie-shuvit” and the “nose-manual,” but says that we should not expect her to turn pro anytime soon.

Hyojoo also addressed her newfound fame in a recent Instagram post. She wrote, “It’s really awesome[…] but I feel afraid too. I never expected it. It’s actually [a kind of] pressure on my longboard activity. But now I feel like I can enjoy it! See what I will be!”

We think she’s super inspirational and a blast to watch. We will definitely have our eyes on Ko Hyojoo!

Vogue
Ko Hyojoo
How does this article make you feel?