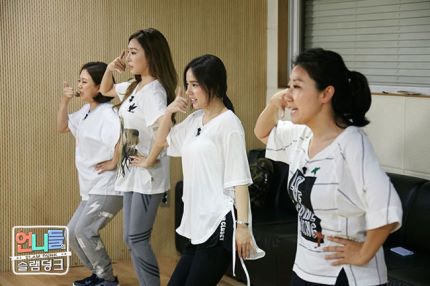 Sources in the industry have said that the newly formed girl group Unnis will be releasing their song “Shut Up” on music sites on July 1 at midnight KST. The proceeds will be donated to help other people achieve their dreams.

Unnis is a project group that consists of the cast of “Sister’s Slam Dunk,” who have embarked on this adventure in order to fulfil member Min Hyo Rin’s dream of being in a girl group. The members also include Girls’ Generation’s Tiffany, Jessi, Hong Jin Kyung, Kim Sook, and Ra Mi Ran, and their song “Shut Up” has been produced by JYP Entertainment’s Park Jin Young.

Unnis will also be making their music show debut on July 1’s episode of “Music Bank”!

Watch the members prepare for their big debut in the latest episode of “Sister’s Slam Dunk” below.