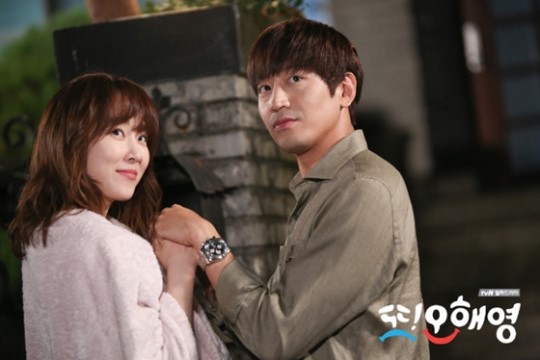 During a wrap-up interview of “Oh Hae Young Again” on June 29, actress Seo Hyun Jin talked about the various kiss scenes she had with co-star Eric.

She says Eric was quite the perfectionist when filming, explaining, “It felt like we were rehearsing action scenes instead of romantic scenes. If our chemistry doesn’t match perfectly it will get awkward between us, so we rehearsed it very sincerely.”

Seo Hyun Jin also compliments Eric, saying, “He has very good ideas. He was the one who thought of the romantic scene in the last episode. He said that we should try different movements in order to highlight the fact that Jin Sang (Kim Ji Suk) is hiding.”

She also addresses the dramatically intimate scenes, jokingly saying, “The wall kiss scene was so intimate that we became unstoppable after that.”

Lastly, she says that Eric was hard to approach at first, explaining, “When I debuted as a singer, Eric was such a high senior to me that I couldn’t even look at his eyes. But the Eric that I met through ‘Oh Hae Young Again’ was a sweet and kind person. I think I’ve become good friends with Eric thanks to this drama.”

If you haven’t already, catch up to the last episode of “Oh Hae Young Again” on Viki: