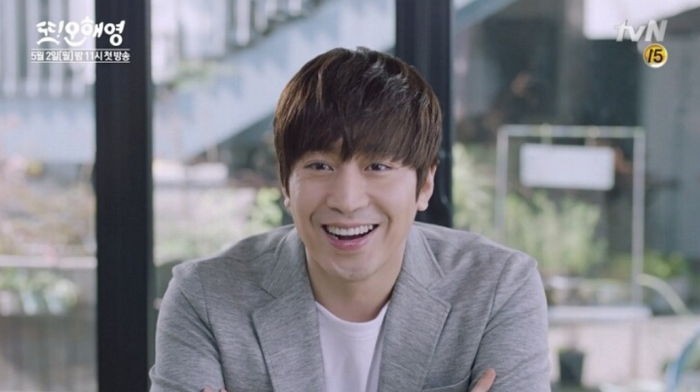 After the end of tvN’s “Oh Hae Young Again,” Eric — who calls the drama the drama of his lifetime — had praise after praise for Seo Hyun Jin, and gave her all credit for the success of the drama.

He said, “Among the staff, Seo Hyun Jin… Hae Young is referred to as a ‘scam character.’ Her acting is that good, and she was so bright on set. Even if she had a lot of lines, and even if she didn’t sleep the night before, she brought a great energy to the set. She’s a jewel.”

Eric went on: “Hae Young was a charming character and [Seo Hyun Jin] really brought her to life. The character could have easily become annoying, but she really portrayed her well. […] Physically, I got tired, too, after five days of filming with no sleep, but Hae Young had so many lines on top of that. It wasn’t so bad for me because I didn’t have that many.”

Talking about the first kiss scene he had with Seo Hyun Jin, he said, “There was a lot of pressure because it was a big kiss scene coming after nine episodes. […] And before Do Kyung and Hae Young kissed, Anna (Heo Young Ji) and Hoon (Heo Jung Min) had a kiss scene first, and they really went at it.” Eric said that because the other couple’s kiss, they were instructed by the director to do more.

When told that fans call Eric a “kiss master,” he laughed and said, “Even I thought the scene where Hae Young runs to me and leads the kiss was great.”

Talking about what he likes personally, Eric said, “Whether I’m in the lead or not, I like it all.” He then went back to the subject of the drama, and said how hard it is to do a kiss scene in front of so many people, though it looks good on camera. “It’s hard for guys like me, but it’s harder for actresses. Considering that, Hae Young did an awesome job.”