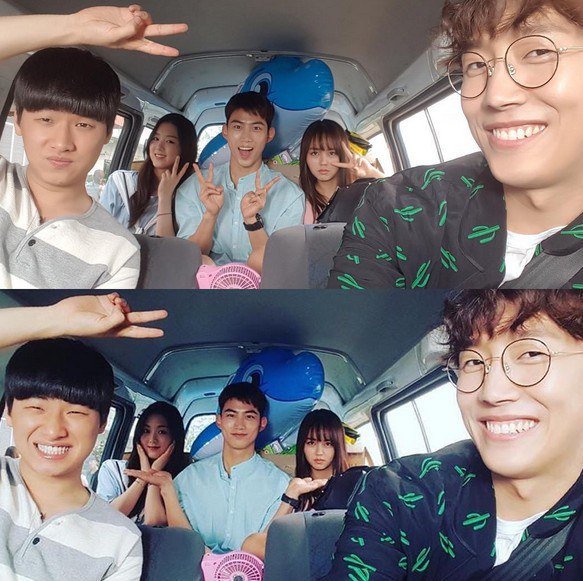 Kim So Hyun Shares Cute Group Shots With “Bring It On, Ghost” Cast Including Taecyeon And More

Kim So Hyun is getting us even more excited for her upcoming drama “Bring It On, Ghost” (working title)!

Kim So Hyun will soon be starring in this new tvN drama opposite 2PM’s Taecyeon, and on July 4 she shared two photos to her Instagram of the pair in a vintage van along with three of their co-stars (as well as an inflatable dolphin). Actors Kang Ki Young and Lee David are in the front, while Baek Seo Yi joins Kim So Hyun and Taecyeon in the back, and the group looks like they’re ready for a trip to the beach.

In the photos, Kim So Hyun is pulling a totally blank face, while Taecyeon does some cute aegyo with his co-stars. Kim So Hyun includes the hashtags, “Bring It On, Ghost,” and “Fighting,” as well as emojis of a heart and a kissing face.

“Bring It On, Ghost” also stars Kwon Yool, Kim Sang Ho, and more. The story follows Taecyeon’s character, a boy who’s able to see ghosts, and ghost Kim So Hyun as they team up to help ghosts get closure so they can pass on to the afterlife.

The show’s first episode will be airing on July 11 on tvN. Are you looking forward to the premiere?

2PM
Kim So Hyun
Taecyeon
Bring It On Ghost
How does this article make you feel?