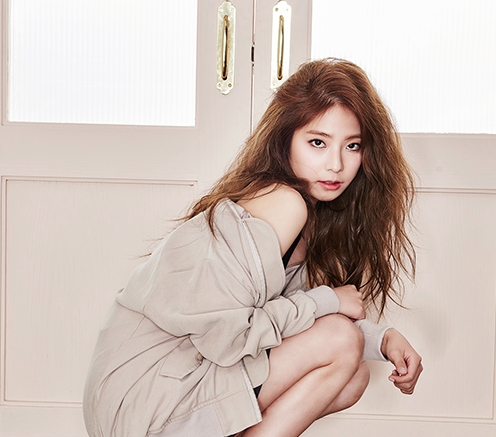 Juniel Explains How Much She Loves Girls’ Generation’s Taeyeon

Singer Juniel has made a comeback after a one-year hiatus with her digital single “Pisces,” and she has returned more mature and lovelier than ever.

She recently sat down for an interview to share things that have been going on in that time and answer some questions that her fans have been curious about.

Juniel is well known for being a huge fan of Girls’ Generation’s Taeyeon. To this, Juniel says, “Yes. That’s right. She’s so pretty. I like pretty people. I only follow two people on my SNS: Taeyeon and Krystal [from f(x)]. When I first met Krystal, I froze in place because she was so pretty. It was back when f(x) was promoting ‘Electric Shock.'”

She continues, “I didn’t even know I had fallen for Taeyeon, though. It was just natural. Her singing is great, no explanation necessary. I once went to a showcase of hers when she was just a trainee. She sang the song ‘Moonlight’ back then and I thought, ‘Wow, she’s so good at singing.’ That’s how I became her fan when she debuted as a member of Girls’ Generation.”

Unfortunately, it seems that Taeyeon doesn’t know this passionate fan exists because Juniel says, “I haven’t told [Taeyeon] yet. Honestly, I feel shy. I’m close with Sunny, and even met her a few days ago, but I feel shy even telling Sunny how I am a big fan of Taeyeon.”

Girls' Generation
Taeyeon
Juniel
How does this article make you feel?