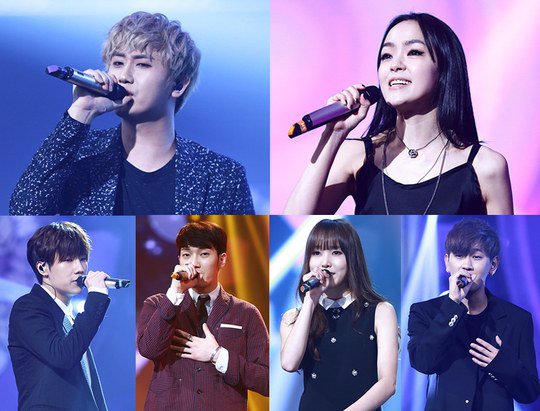 Heo Young Saeng and Lee Jung Hyuk performed first with a cover of Shinhwa’s “Perfect Man” and got 407 votes.

Next up was GFRIEND’s Yuju and Joo Bum Jin who is the younger brother of singer Jinju. They performed Primary’s “See Through” and received 367 votes.

Third was Kim Feel and Shin Hae Won’s rendition of Jung Joon Il’s “Hug Me” for which they got 432 votes.

The fifth performance was Crush and Park Eun Ock’s cover of Kim Yeon Woo’s “Farewell Taxi” for which they got 419 votes.

Last up were INFINITE’s Sunggyu and Kwon Sun Young’s performance of Kim Kwang Seok’s “Although I Loved You.” They received 402 points.

Kim Yoona and Chae Bo Hoon were crowned the winning duet of this week’s episode. They will be returning for next week’s episode along with Kim Feel and Heo Young Saeng’s respective teams as the audience voted to see them again next week.