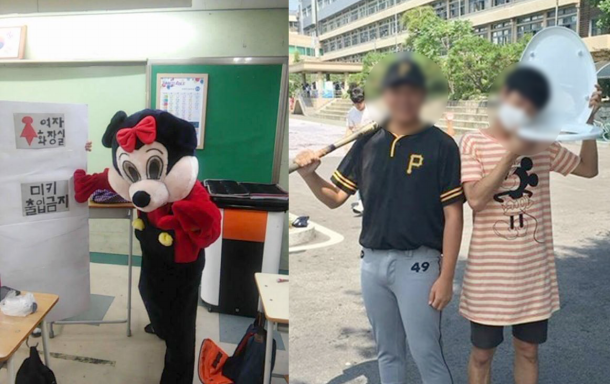 Every year, Uijeongbu High School makes waves with their unique graduation photos. The photos typically contain some reference to the Korean entertainment industry, whether it’s simple cosplay or a parody of trending issues.

Some of the photos released on July 8 contained references to the affair between director Hong Sang Soo and actress Kim Min Hee as well as the sexual assault cases against JYJ’s Park Yoochun.

In one photo, a student is wearing a Mickey Mouse shirt while carrying a toilet seat. Another student beside them is dressed as a Pittsburgh Pirates baseball player, referencing the sexual assault investigation against player Kang Jung Ho.

Another photo shows another student dressed as Mickey Mouse standing in front of a sign labeled “Women’s Bathroom. No Mickeys allowed.”

The recurring theme of Mickey Mouse in the photos is a reference to Park Yoochun’s former stage name Micky Yoochun.

Some of Park Yoochun’s fans have protested against the parody photos, claiming that the two high school students are defaming the celebrity’s character. The fans have also stated their intention to report the issue to C-JeS Entertainment, Park Yoochun’s agency.

Meanwhile, other commenters have argued that parodies of current societal issues are not defamation.