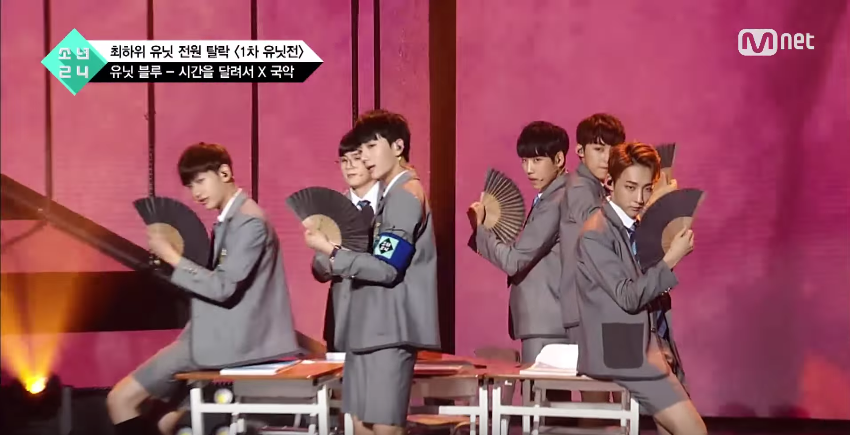 Mnet survival program “Boys24” held its unit competition on July 9, where one team out of seven would be eliminated. Unlike most survival programs, which typically eliminate individual members, all six members of the eliminated team will be dropped from the show.

In this round, the units were told to mix and match songs and genres.

Unit Green was given the musical genre and chose to perform VIXX’s “On and On” using a Jekyll and Hyde concept they used for “Hyde.” They used their black-and-white costumes and spliced in some eerie piano music to achieve an intense and dramatic effect and received 257 points in all.

Unit Sky faced some problems early on when Yonghyun was voted off from the leader position. They chose the acoustic genre and covered WINNER’s “Sentimental.” Despite their cute and boyish performance, Shin Hye Sung commented that nothing stood out in particular. They received 251 points.

Unit Yellow got the R&B genre and performed Block B’s “Her.” They faced some problems with member David, who was unable to mix well with the rest of the team and played around in serious situations. However, their unique and perfectly executed choreography garnered them 287 points.

Unit Blue were given the traditional music genre and covered GFRIEND’s “Rough.” They were praised by the masters for putting on an excellent performance despite the difficult genre, using fans in their dance routine, and got 263 points.

Unit White got the hip-hop genre and faced some challenges with the topic, receiving some harsh criticism from Vasco during their preparations. In the end, they covered TWICE’s “Cheer Up” and scored 259 points with their energetic and retro performance.

Unit Red covered the EDM genre and GD & Taeyang’s “Good Boy.” They also faced internal problems, with leader Sungho criticizing Won harshly for his dancing skills. In the end, they put on a flashy and bright performance and received 249 votes.

Unit Purple covered SISTAR19’s “Gone Not Around Any Longer” with the acoustic genre. Despite their interesting chair performance and emotional vocals, they were the group with the lowest number of votes (245). All six members were eliminated from the show while the other units moved to the next round.