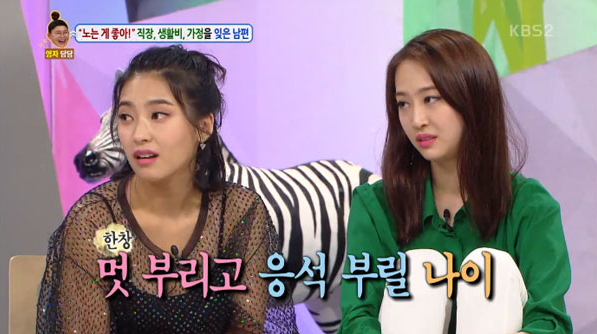 On the July 11 episode of “Hello Counselor,” a 23-year-old wife opens up about about her husband who places greater importance on spending time with his friends than with his family.

Her 26-year-old husband spends the majority of his income on playing with his friends and is unable to maintain employment at one place for over two months.

One of his worst offenses includes spending 2 million won (approximately $1,700) on a night out with his friends. Upon hearing this, SISTAR’s Bora says, “That makes me angry. 2 million won is not the kind of money that just tumbles around. It makes no sense.”

The husband has gotten fired from 10 different jobs since getting married and spends unnecessary expenditures despite not having any money. Instead of taking public transportation, he opts for taxis. When his wife tries to prevent him from going out at night, he deliberately starts a fight so he can use it as an excuse to leave their home.

Unable to understand his wife’s perspective, the husband explains, “Don’t all men spend money that way?”

Dasom asks the husband, “Why did you get married?” The husband replies, “I got married because I love my wife.” However, the husband says it is not okay for his wife to go out since she is a mother.

Angered by his sexist comments, Bora grabs her own hair and exclaims, “I want to go home.”

The young wife comments on how she just wants to live happily. Hearing her simple desire, Bora sympathizes and tears up.

Bora comments, “Whether you’re young or old, sacrifices have to be made. But he is living without being responsible for his own child.”

Likewise, Dasom says, “[Her story] made my heart hurt so much. I think he really needs to change a lot.”

What are your thoughts on the young couple’s situation?

Hello Counselor
Bora
Dasom
SISTAR
How does this article make you feel?